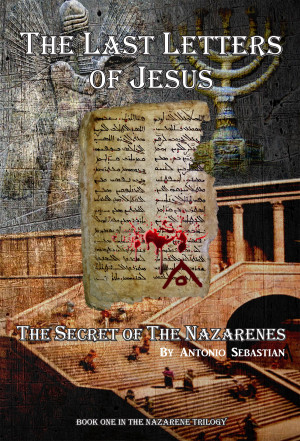 The Last Letters of Jesus: the Secret of the Nazarenes

Israel in the north is home to Rabbi Yeshua bar Yosef and he is running out of time. After a blockade of the Temple Sacrifices in Jerusalem, he is imprisoned alongside the assassin sent to kill him. Against all odds, his family and friends race to free him.

Rabbi Yeshua is a prophet and a mystic who can see the approaching holocaust. Within the violence of animal sacrifice, he can see the destruction of the Jewish people. He desperately tries to send word to the Sanhedrin but the forces of evil seek to silence his voice forever.

Based on extensive research, the latest archaeology and modern textual interpretation, the Last Letters of Jesus is a work of Historical Fiction which tries to answer truthfully the age-old questions of 'who was Jesus' and 'what did he really say'?

The Last Letters of Jesus
Palestine in the first century is a melting pot of Hebrew, Greek, Roman and Oriental thought. Lost in dreams of its past, Judea is a country at war with its own future. One man is caught between two worlds and strives to stop the violence.

Reviews of The Last Letters of Jesus: the Secret of the Nazarenes by Antonio Sebastian