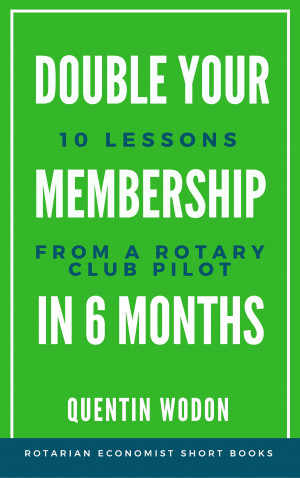 Double Your Membership In Six Months: 10 Lessons from a Rotary Club Pilot

The experience of the club suggests that it is a good idea for membership and volunteer-based organizations to (1) Plan strategically; (2) Reduce meetings and increase their service work; (3) Improve service opportunities; (4) Reduce membership costs; (5) Partner with local nonprofits; (6) Invest in their public image; (7) Tap their members’ networks; (8) Apply for funding; (9) Set targets and monitor progress; and finally (10) Ensure leadership and enjoy their luck!

None of this is rocket science. Whether these simple lessons can work in practice depends on the dedication of an organization’s leadership and members. But hopefully, these simple lessons will be of interest to members of other Rotary and service clubs, as well as other membership-based organizations that rely on volunteers to improve lives in their communities.

Quentin Wodon is a Lead Economist in the Education Global Practice at the World Bank where he leads work programs among others on equity and inclusion in education, child marriage, out-of-school children, and the wealth of nations. Previously, he managed the World Bank unit on values and development, served as Lead Poverty Specialist for West and Central Africa, and as Economist/Senior Economist in the Latin America region.

Before joining the World Bank, he worked among others as Assistant Brand Manager with Procter & Gamble, volunteer corps member with the International Movement ATD Fourth World, and (tenured) Assistant Professor of Economics with the University of Namur. He has also taught at American University and Georgetown University. A lifelong learner, he holds graduate degrees in Business Engineering, Economics, and Philosophy, as well as PhDs in Economics, Environmental Science, Health Sciences, and Theology and Religious Studies.

A recipient of the Prize of Belgium’s Secretary of Foreign Trade, a Fulbright grant, and the Dudley Seers Prize, Quentin has served on several advisory boards for non-profit organizations and university programs, and as Associate Editor for academic journals. A past President of the Society of Government Economists, he is currently serving as President of the Association for Social Economics.

Quentin is actively involved in Rotary with his club (currently serving as President), District (former Evaluation Adviser and Interact Chair, among others), and Rotary International (committee member for the Rotary Foundation and other roles). His father was a Rotarian. His daughters founded the Interact Club of their High School. Quentin launched the Rotarian Economist blog in 2014 on World Polio Day and the Rotarian Economist Short Books series in 2017.

Books in the Rotarian Economist Short Books series provide rapid and practical introductions to topics related to volunteer work, service clubs, nonprofits, and the areas of focus of the Rotary Foundation of Rotary International. These areas of focus are promoting peace, fighting disease, providing clean water, saving mothers and children, supporting education, and growing local economies. Other topics are considered as well, including polio eradication and development work more generally.

The book series is associated with the Rotarian Economist Blog . The aim of the blog and the book series is to provide analysis that can help readers make a positive difference in the life of the less fortunate.

To receive email alerts of new books in the series, as well as new blog posts and resources made available on the Rotarian Economist blog, please provide your email through the widget at https://rotarianeconomist.com/.

You have subscribed to alerts for Quentin Wodon.

You have been added to Quentin Wodon's favorite list.

You can also sign-up to receive email notifications whenever Quentin Wodon releases a new book.