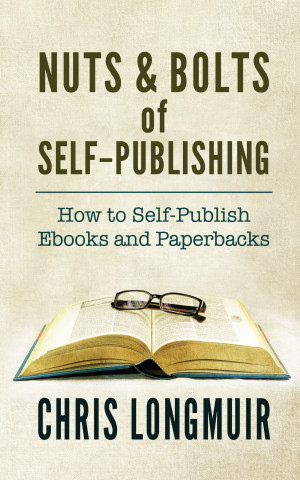 By Chris Longmuir
Self-help guide on self-publishing. How to create accounts, format a manuscript for ebook and paperback publication, add a TOC, acquire and register an ISBN, upload and submit a book for publication, and what needs to do be done after publication. Information about costing and pricing the book, author services, and outsourcing, plus a lot more. More
Nuts & Bolts of Self-Publishing

If you only buy one book on self-publishing, this is the one for you.

Self-publishing is not difficult once you have the roadmap and know what is expected and what you have to do to produce a professionally designed book. This comprehensive guide to self-publishing will provide you with that roadmap. It covers all aspects of self-publishing and will help you avoid some of the pitfalls you might encounter.

Alongside the step-by-step instructions, you will find information about costing and pricing your book, author services, and outsourcing, as well a lot more.

Chris Longmuir is an award-winning novelist. Her previous crime novels have won the Pitlochry Award and the Dundee International Book Prize.