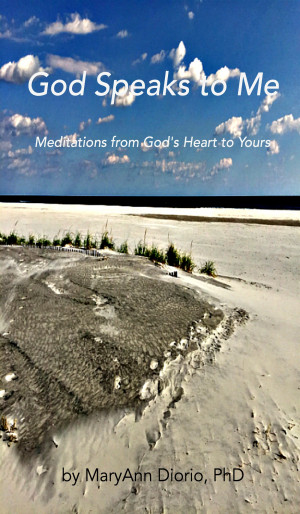 God Speaks to Me: Meditations from God's Heart to Yours

In this inspiring book, Dr. MaryAnn Diorio has recorded some of the words God spoke to her over a 10-year period of personal journaling. Although she originally thought the words were only for her, Dr. Diorio received instruction from the Lord to publish her journal for all those whose hearts would be open to hearing from God.

Dr. MaryAnn Diorio is a widely published, award-winning author of fiction, non-fiction, and poetry. She writes riveting, compelling, page-turning fiction that deals with the deepest issues of the human heart. Her latest novel, IN BLACK AND WHITE, is a powerful love story between a white woman and a black man. She has also written THE ITALIAN CHRONICLES Trilogy, including Book 1: THE MADONNA OF PISANO, Book 2: A SICILIAN FAREWELL, and Book 3: RETURN TO BELLA TERRA. Other works of fiction include: SURRENDER TO LOVE (TopNotch Press, 2015), and A CHRISTMAS HOMECOMING (Harbourlight Books, 2012-Winner of the Silver Medal in E-Book Fiction in the 2015 Illumination Book Awards Contest). MaryAnn is currently working on a novel on racism titled IN BLACK AND WHITE. It is scheduled for release in 2019.

MaryAnn has also authored nine children’s books: POEMS FOR WEE ONES, THE DANDELION PATCH (winner of BEST BOOK OF JUVENILE FICTION in the 2017 Pinnacle Book Achievement Awards Contest), CANDLE LOVE, TOBY TOO SMALL, DO ANGELS RIDE PONIES? WHO IS JESUS? (Finalist in the National Indie Excellence Book Awards), A STUDENT’S GUIDE TO NATHANIEL HAWTHORNE, A STUDENT’S GUIDE TO HERMAN MELVILLE, and A STUDENT’S GUIDE TO MARK TWAIN, all published by TopNotch Press.

MaryAnn is married to her awesome husband Dominic, a retired ER physician. They have two amazing adult daughters, a wonderful son-in-law, and six rambunctious grandchildren. When not writing, MaryAnn loves to read, paint, and play the piano, cello, and guitar. She also loves to make up silly songs for her grandchildren.

You have subscribed to alerts for MaryAnn Diorio, PhD, MFA.

Would you like to favorite MaryAnn Diorio, PhD, MFA?

You have been added to MaryAnn Diorio, PhD, MFA's favorite list.