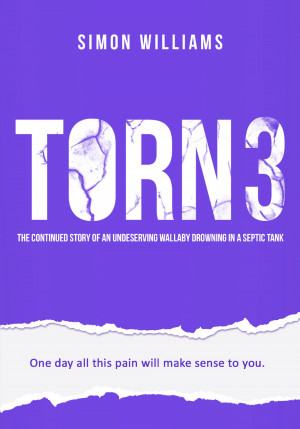 Torn 3: The Continued Story of an Undeserving Wallaby Drowning in a Septic Tank

By Simon Williams
A man has his son abducted from him by his wife and struggles with the arduous task of keeping himself together with his wit and humor while he continues the fight to reunite with his child.

Simon Williams was born in Townsville, Australia and all he dreamed about while growing up was travelling the world. He had his sights set on visiting Leningrad, Ceylon, and Persia but he is buggered if he can now find them on a map.

Simon started writing as a way of controlling his feeling of helplessness after his son was abducted to Brazil by his ex-wife. He realized the only way to keep himself going was to rely on his cynicism and sense of humor so he turned that into writing books.

He has written 9 books. None of them critically acclaimed or up for a Nobel prize for literature but that matter is neither important or useful in dealing with the worries of day to day life.

His favorite pastime is trolling his mates on Facebook. He has only every been unfriended twice. On both occasions by his current wife.

You have subscribed to alerts for Simon Williams.

You have been added to Simon Williams's favorite list.

You can also sign-up to receive email notifications whenever Simon Williams releases a new book.