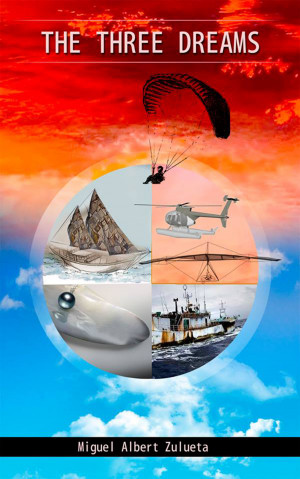 By Miguel Albert Zulueta
The Three Dreams is an engaging, well-crafted adventure story with an important commentary of commercialism, globalization, and the need to find one’s way to passion, love, and inner peace in this fast-changing world.

Told from the perspective of a Filipino pilot, it’s a refreshing read that adds a distinctly Southeast Asian color to the literature of Bach and Pirsig. More
"Mr. Pilot" in the story, seeking to escape a dysfunctional upbringing, chooses a path of adventure, risking the uncertainty of not knowing exactly where the wind will take him. A helicopter pilot by trade, his romance with the air takes him to places far and wide, spanning countries as far as Saudi Arabia, America, and Indonesia. His piloting lands him shipwrecked on an Island in the Pacific where he undergoes a radical change in perspective, but not before undergoing trials on a tortuous path of self-realization.

"Mr. Pilot"- Samuel - seeking to escape a dysfunctional upbringing, chooses a path of adventure, risking the uncertainty of not knowing exactly where the wind will take him. And take him it does—on a whirlwind adventure of his life. His romance with the air is transformed into true love for an exotic pacific islander and elevates his purpose to the survival of two cultures and ultimately that of mankind.

"It is in the compelling zest of high adventure and of victory, and in creative action, that man finds his supreme joys." -- Antoine de Saint-Exupery

I’m not a professional writer. I’m merely an average person with a story to tell. Although it took me two years to write The Three Dreams, it is more accurate to say it took me a lifetime to have something worthwhile to write about. Reducing sixty years down to 600 pages was to relive the memories and distill the most intense moments found therein.

In those living years I managed to suffer two failed marriages, sire two children, get an MBA, work various jobs, and fail at numerous attempts to start my own business. Having succeeded; went through a drastic reversal of fortune when my business literally burned to the ground. I managed to dig myself out of that deep dark hole in the late ‘90’s when I finally got lucky. As an hotelier, I’ve established myself as an innkeeper for the past 25 years.

Fixated with a childhood fantasy to fly, and discontented with life choices that took me farther away from the elusive thing called ‘happiness’, I changed careers mid-life. I flew fixed wing aircraft and transitioned to helicopters which not only captured my imagination, but the very essence of excitement and adventure I so longed for. In the pursuit of flying helicopters, I earned the highest license—Certified Flight Instructor; Rotary Craft.

I’ve recoined that saying about retired flyers to read-- “Old flyers never die, they just paraglide their golden years away chasing sunset winds.” Today I paraglide, preferring the open skies strapped beneath an un-motorized fabric wing to escape the clutches of being ‘chair-borne’ with all its accompanying trappings.

My other passion is family. I have discovered, better later than never, that true adventure is raising a son and daughter. The greatest satisfaction and highest calling is to rear children in a loving home. Seeing them blossom, the most treasured experience of all. My third wife who will take me to the grave, runs the business leaving me with time. Precious time. I’ve been able to take the time to write this simple story which has held me captive for the past ten years. It’s a simple story in the hope of leaving something to be remembered by.

You have subscribed to alerts for Miguel Albert Zulueta.

You have been added to Miguel Albert Zulueta's favorite list.

You can also sign-up to receive email notifications whenever Miguel Albert Zulueta releases a new book.