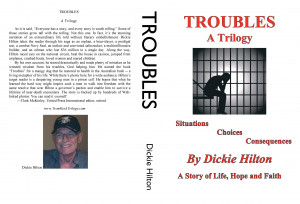 Abandoned as a toddler, Hilton learned woodsman skills from the man who raised him in California’s Sierra Nevada foothills. Running away at 15 from an Arkansas school, lying about his age, he joined the Navy at 16, became a UDT-frogman. Troubles is the story of a warrior who survived three bullet wounds and capture in the jungles of Vietnam, America’s most notorious prisons and Big Oil boardrooms. More
It’s been said, “Everyone has a story, and every story is worth telling.” Some of those stories grow tall with the telling. Not this one. In fact, it’s the stunning narration of an extraordinary life told without literary embellishment. Dickie Hilton takes the reader through his saga as an orphan, a frightened bear-slayer, exposed to bigotry for the first time, witness to extreme racial prejudice and deadly backlash, a prodigal son, a combat Navy UDT-Seal, an outlaw and convicted safe-cracker, a multimillionaire builder, and an oilman who lost $36 million in a single day. Along the way, Hilton raced cars on the national circuit, beat the house in gambling casinos, jumped from airplanes, raced and crashed boats, loved women and reared children.
Dickie Hilton was a war-baby born in 1943 in Oakland, CA. He didn’t know his mother; she abandoned him when he was a year old. She handed him over to the woman who babysat for her. Dickie didn't know his father either; he was away in the service. Dickie was gone by the time he returned home.
At that young of an age, Dickie has no memories of anyone except for the man and woman who raised him. They are the ones he called Mom and Dad.
When he was between the ages of 10 and 12 years old he suffered heartbreaking loss of loved ones. First he lost an eight year old brother he didn’t know he had. Then two years later he lost the women he called 'Mother and Grandmother' together. All of them died in horrible, tragic accidents.
He's been down so many roads his entire life finding himself in one situation after another. Some were good, some were not so good, and in some cases they turned his life upside down. Looking back now he knows he brought it on himself all because of the choices he made. Almost everyone at one time or another in their life ends up in a situation or situations that are beyond their control and they have to make a choice. People don’t think about the consequences of those choices or can't see they may be getting into a worse situation or that their actions or in-actions could cause undesirable consequences; all of which can shape a life either in a good way or bad, just as his choices did in his own life. He couldn't see the messes he was making at those times in his life until it was too late (first as a runaway at 15-1/2 with the horrors of being on the road, entering the Navy at 16-1/2, becoming a UDT Frogman sent to Vietnam and experiencing the horrors of war, then ending up in prison at 19 with fears of unknown dangers therein).
After prison, he was successful in Arkansas and Oklahoma as a Master Mason in construction that later led getting into the oil development. Governor Reagan pardoned him in recognition of his successes.
By his own account, he sinned dramatically and made plenty of mistakes as he wrested wisdom from his troubles, God helping him. He named the book “Troubles” (which is a living metaphor of his life) for a mangy dog that he restored to health in the Australian bush. You don’t have to buy three books to read his story; this book is a trilogy all in one with Situations, Choices, and Consequences. While there’s plenty here for a wide audience, Hilton’s target reader is a despairing young man in a prison cell. He hopes that what he learned the hard way might inspire such a man to walk into freedom with the same resolve that won Hilton a governor’s pardon and enable him to survive a lifetime of near-death encounters. The story can be seen and followed in dated albums on Facebook as photo story-line of his life’s timeline.

I am almost 74 years old and have been told many times that I should write a book about all the things that I have seen and done throughout my whole life. I have been all around the world many times both for business and pleasure. I have met many interesting people. I started writing in 1988, but only got up through the first 20 years of my life. After that I stopped writing because I was too busy starting my life over again for a fifth time. This is the story of my life...it has not been an easy life, but then no one said it would be. I wanted to write about the situations I got into, the choices I made and the consequences I had to face when I made the wrong choices in hopes that it might help someone who found themselves in similar situations. Hope you enjoy the read!

You have subscribed to alerts for Dickie Hilton.

You have been added to Dickie Hilton's favorite list.

You can also sign-up to receive email notifications whenever Dickie Hilton releases a new book.