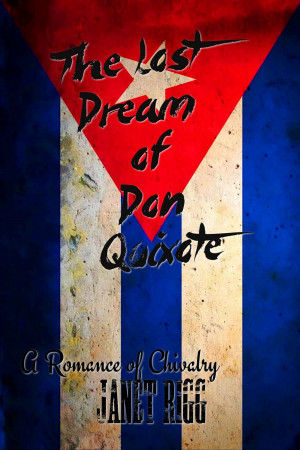 The Lost Dream of Don Quixote: A Romance of Chivalry

By Janet Rigg
In The Lost Dream of Don Quixote, Rigg weaves historical fact with magical fiction into a story of how Fidel Castro drew from his subconscious spiritual guides which inspired his rise into becoming Cuba's revolutionary leader and laying the foundations for a new modern chivalric society. More
When the Cuban revolutionary, José Martí awakens from death in the afterlife, he finds himself high in the Sierra Maestra and is swiftly led by forces to the Hacienda of the spirits. There he finds the ghosts of his fellow revolutionary comrades of Cuba's bid for independence.

As time continues, the spirit of José Martí finds the attic of the house in which the souls have been drawn. The apparitions of books swiftly manifest upon empty bookshelves lining the attic walls. Immediately observing the novel, Don Quixote de la Mancha he begins to read his unrivalled favorite literature aloud. His fellow veterans also discover the library and as José Martí continues, he summons the spirit of Don Quixote; returned from the dead to an afterlife as a worldly ghost.

When the owners of the hacienda appear to the spirits for the first time, they become aware that their presence is felt by the couple. Soon Lina gives birth to a son. Instantly a special bond forms between Don Quixote and the newborn. The veterans are equally enamored with the new child; Fidel Alejandro Castro.

Don Quixote serves as a kind of alter ego for the young Castro, often seeing the events of his childhood and pre-revolution society through the prism of the rites of chivalry.

Janet Rigg was born of a mother of German-Jewish dissent and a father of English-Scottish stock. They were interesting and inspiring people who both had their respective and profound effect on Janet during her childhood years.

Her Mother was the only female builder and contractor in the area of Berkeley where they lived, building dozens of original houses during her active engagement in the profession. Janet's grandfather was a chief engineer on British ships for forty years. He took her father to sea at the tender age of twelve while directing his education which led to her father's entrance to the University of California at Berkeley. He later became instrumental in ending capital punishment in California. He witnessed over one hundred executions during his career as a successful lawyer and eventually filled his position as a very popular and liberal judge.

Janet's background and upbringing moulded her into a strong, stubborn young woman who nurtured high hopes, ambitions and personal aspirations. Despite her battle with dyslexia Janet graduated from Stanford University with a BA in English Literature and the Arts which led to her career as an English language lecturer for many years at various universities around the country. Nothing was to deter Janet from fulfilling her dream to write her novel 'The Lost Dream of Don Quixote' in which she narrates fictional and non-fictional events that unfolded in the life of her personal hero and role-model - Fidel Castro. From his birth to his growing up years as an innocent but highly intelligent youth; the man who ultimately became known to the world as the most charismatic, political and tenaciously long-during leader of the Cuban peoples.

You have subscribed to alerts for Janet Rigg.

You have been added to Janet Rigg's favorite list.

You can also sign-up to receive email notifications whenever Janet Rigg releases a new book.