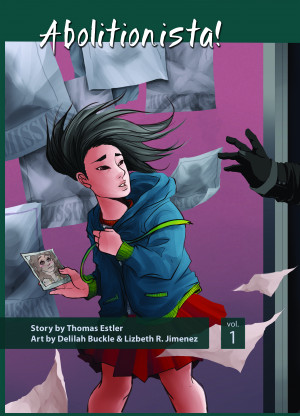 By Thomas Estler
Eden’s best friend disappears, and all the clues lead to the dark, underground world of modern-day slavery. Will Eden find her friend? Will she be caught in the same trap? Are the powers of true friendship enough to save them both from the man who wants to enslave them? More
This Nancy Drew-styled crime mystery tells one of the most common human trafficking stories in the U.S.: a girl runs away from home. Delilah flees a creepy home environment only to be “rescued” by a trafficker with a plan to enslave her. Readers learn 1) how to recognize a recruitment conversation, 2) how to deal powerfully with a predator, and 3) who they can go to for help if they get into trouble.

A couple years ago, I had the idea of throwing a big birthday party for myself on the rooftop of an apartment building near Times Square and I thought about asking my friends to donate a few dollars to a charity instead of giving me a birthday present. Then I asked myself the question, “What charity or issue do I care about so much that I would want to raise money to support it?” And immediately I heard the answer in my head: the fight against modern-day slavery. Maybe my heart was answering too, because no one had to explain to me the importance of this issue...in my heart I seemed to understand that human trafficking meant unspeakable suffering and it needed to be stopped. This was the moment that I became an Abolitionista.

My friend Ruth Whalen, who fights human trafficking in New York City courts, told me about an event that she had attended for young women who had been rescued from human traffickers. She noticed that many of the young survivors were reading comic books. Then Ruth said, “Someone should write a comic book about this issue,” and I thought to myself, “That someone should be me.” Suddenly, two things came together for me: a thing that I really liked doing...writing, AND a cause that I felt deeply about...human trafficking. And that’s how the manga ABOLITIONISTA! was born.

I'm 21 years old and I live in Atlanta, Georgia with my very supportive family and friends. I've been drawing in the Manga/Anime style for about 10 years now and I just recently graduated art school with a bachelor's in Illustration. I'm so glad I got to be a part of this project along with Mr. Estler and everyone else who has been a part of it. Thank you so much for reading about me and also for reading ABOLITIONISTA!

Lizbeth is the creator of the popular manga series Sacred (www.sacredthemanga.com). She leant her impressive talents to the shading, screen tones, lettering, graphic design and dialogue editing of ABOLITIONISTA! Lizbeth studied fine arts at the High School of Art and Design and the School of Visual Arts, both in New York City. She is an entrepreneur and an actress and is studying to become an art professor.

You have subscribed to alerts for Thomas Estler.

You have been added to Thomas Estler's favorite list.

You can also sign-up to receive email notifications whenever Thomas Estler releases a new book.