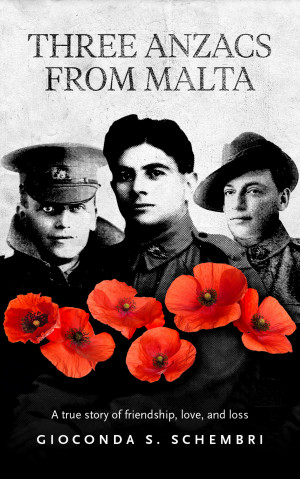 Three Anzacs from Malta: a true story of friendship, love and loss

By Gioconda Schembri
Rated 5.00/5 based on 1 reviews
This book follows the journey of three young Maltese men, Charles, Waldemar and Anthony, from their Mediterranean island all the way to Australia, the trenches of Gallipoli, France and the fields of Flanders against the backdrop of the raging First World War, as they are thrust in one of the deadliest conflicts humankind had ever seen, which would destroy a whole generation of youth. More
Barely in their early twenties, Charles, Waldemar and Anthony leave behind all they hold dear to pursue their dreams for a bigger and brighter future in a faraway land. Educated, charming, and adventurous, they soon settle in their adoptive home, securing steady jobs, forging new friendships, and finding love. But their carefree days end abruptly when the sombre clouds of a global war darken their world. What unfolds is one of the deadliest conflicts humankind had ever seen, one that would destroy a whole generation of youth.
From the tiny Mediterranean island of Malta to the vast Australian continent, and from the unforgiving slopes of Gallipoli, all the way to the muddy trenches in Flanders, ‘Three Anzacs from Malta’ follows these young men as they carve out their destinies amidst unprecedented bloodshed and suffering.
This is a timeless story about migration, the heartache of separated families, loss and war. But this book is mainly a tribute to the tenacity of the human spirit in the face of enormous adversity, as well as a celebration of the virtues that transcend borders and time: courage, friendship, and love.

Gioconda S. Schembri née Mifsud was born in Malta. After graduating as a Doctor of Laws from the University of Malta, she joined the public service and served for three years at the Malta High Commission in Canberra as First Secretary, as well as Acting High Commissioner for several months. Gioconda migrated to Australia in 2002, where she has worked with the Maltese Community Council of Victoria, the Australian public service, the Consulate of Malta, and as a freelance translator of the Maltese language. Her interests are varied and include history, theatre, music, literature, international politics, travel, and crafts. She lives in Melbourne with her husband, Darren, and son, Thomas.

Review
Michael Farrugia reviewed on May 10, 2017

Well researched and a great read! Gioconda manages to bring the three young men to life. The quotes from the letters and the war diary are very poignant and the book really makes you question the futility of war.

You have subscribed to alerts for Gioconda Schembri.

You have been added to Gioconda Schembri's favorite list.

You can also sign-up to receive email notifications whenever Gioconda Schembri releases a new book.