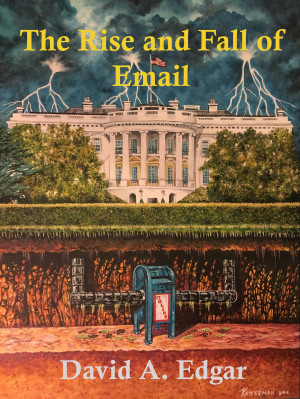 The Rise and Fall of Email

By David Edgar
There is a festering efficiency problem in software technology. The preferred methods for building network applications are wrong and they produce expensive, unreliable systems with no real security. Industry refuses to correct the problems because inefficiency is highly profitable. First encountered in email standardization, this is the story of my fight against the industry to set email free. More
For the first time, the missing history of email and the technology war for the most significant development in connecting humanity since the invention of the telephone. Learn the shocking truth about email’s rise and ultimate corruption by the Clinton administration at the White House. Determine if email’s future, as we know it, maybe at an end.

Experience an unparalleled journey into technology and science, battling legendary companies, pushing past them to be the first to bridge all of email together. Learn the theories that would topple the industry’s technical masters and wreck their plans to charge money for every email message. See the tactical strategies of companies like IBM, Novell, DEC, MCI, AT&T and Microsoft as they all maneuvered to take over email. Watch as one after the other fall in combat, all failing to capture the great email prize. Realize how their disasters opened the door for the Internet to slip in and win the war.

Be on hand as email develops into one of the most important forms of communication so critical that when email breaks down, everything collapses. Go inside the email world of the Associated Press, World Bank, Postal Service, Avery-Dennison, Danish Ministry, and many others. Watch how the millions of email islands become connected forming the super continent needed for full globalization.

Witness White House email from its construction to its disgraceful failure. Learn the details of the White House “Mail2 Problem”, the first Clinton email scandal. This firsthand account uncovers the real truth about President Clinton’s secret “Project X” plan to confuse investigators and cover-up an email conspiracy. Discover where Hillary Clinton learned to corrupt email accountability and why she needed a private email server when she served as Secretary of State.

Calculate the real price of free email and how flaws in its protocol are subjecting all of us to terrible peril by allowing criminals, hackers, and politicians to go unchecked and unchallenged rampaging freely through one of mankind’s most crucial forms of digital communication. What everybody needs to know about email and the dangers that lurk within the depths of its creation.

David has 34 years of experience in the Computer IT community. He graduated from University of Maryland - University College with a Bachelor of Science in Computer Science in 1986. David started his computer career in 1982, at the age of 19, managing a microcomputer at Metropolitan Parts, the largest automotive parts wholesaler in the DC Metropolitan Area. David started his career in government contracting in 1986 by writing both the Operations and User manuals for the United States Information Agency IBM datacenter. He then coauthored the first GSA course in Computer Security in 1988.

In 1989, David designed and constructed his first commercial email gateway MBLink, providing a bridge between DEC-based email systems and cc:Mail. The key differentiator was that MBLink was the first gateway that did not require address registration. It algorithmically converted email addresses and would change the future of email integration. Electronic mail bridges originally took two to eighteen months to configure, were difficult to manage, and were only enabled for a limited number of users. With MBLink, the system was installed and fully operational in 15 minutes, managed itself automatically, and enabled unlimited users. David designed and/or built the first email gateways for 3COM, Microsoft Mail, Lotus Notes, Novell’s Global MHS, and SMTP. During this period, MBLink was the primary email bridge used at the White House from 1992 thru 2000.

In 1999, David was the founder of Altarus Corporation. The company was focused on the development of a secure system for moving application transactions in real-time across wireless networks. David invented an advanced network, data processing architecture and received US Patent 6,912,522 – “System, method and computer program product for optimization and acceleration of data transport and processing”. Altarus became the principle wireless consultant for Hewlett Packard and was a Symbol Technologies Platinum Partner. Worked with NIST to receive the first FIPS 140-1 certified mobile platform (Certificate 255). Designed and developed the first fully integrated mobile biometrics security authentication system engineered to perform perimeter security using fingerprints. This security product was runner up in the Best New Technology award at FOSE 2002.

David was the Principal Investigator for a Cooperative Research and Development Agreement (CRADA) with the Space and Naval Warfare Systems Center in San Diego (“SSC Pacific”) called “Hastily Formed Secure Data Networks”. The purpose of the CRADA was to investigate methods and processes that could be used to quickly assemble a secure data network during an emergency event. David was also the Principal Investigator for a follow-up CRADA with SSC Pacific called “Low Bandwidth Wireless Network” (LBWN). The purpose of the second CRADA was to research the use of various network protocols and determine their overall effects on network performance, their general compatibility with Command & Control (“C2”) data, and their practical usability in low-bandwidth wireless environments.

You have subscribed to alerts for David Edgar.

You have been added to David Edgar's favorite list.

You can also sign-up to receive email notifications whenever David Edgar releases a new book.