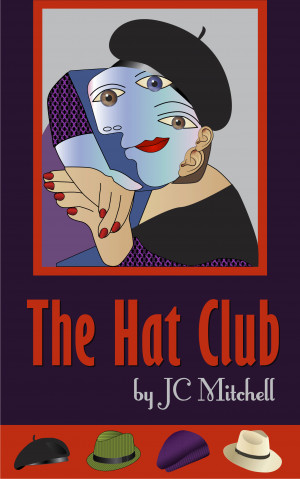 But what happens when three friends scan a drawing of an impossible 4-dimensional object? The three McBucky-Mayer Gigacorp employees — marketing writer Eve, materials scientist Desta, and software engineer Thanh — try this experiment one afternoon with disastrous repercussions: mobile phones create havoc, a giant pastry takes its revenge, people vanish into thin air, and an entire city is driven to a sexual frenzy. And Eve, Desta, and Thanh develop their own strange deformities which prompt them to start wearing hats.

As the crisis escalates, the three are sent from the McBucky-Mayer headquarters in Los Angeles to the Yorkshire city of Sheffield to find out why recently-built buildings are rapidly deteriorating and brand new structures, including a centuries-defunct castle, have popped up overnight. Amidst suspicions of a terrorist plot the trio of friends finally discover the real truth which, surprising as it is, changes each of their lives.
Available ebook formats: epub mobi pdf lrf pdb txt html
First 20% Sample: epub mobi (Kindle) lrf more Online Reader
pdb
Price: $4.99 USD
Buy Add to Library Give as a Gift
How gifting works
Create Widget
Tags: adventure dystopia satire los angeles sheffield technological cloud storage 3d printing cubism iot
About JC Mitchell

Having grown up in Long Beach, California, I spent a decade in Seattle and currently live in England, originally in Kent and now in Yorkshire. I acquired 28 years of experience in computer graphics programming and website design and 24 years of experience writing about coffee and beer.

I have contributed articles to local CAMRA publications, Tramlines, and SmellTheCoffee.Com. I have also written music reviews and blurbs for tourist attractions. I have appeared on local radio as Sheffield's resident American coffee aficionado. Among my many jobs I have worked on a research project on the Sheffield Flood of 1864. I have also been a digital photographer of antiques and of tourist attractions. I currently work in a university library.

Besides writing I also play piano and keyboards, I cartoon a bit, I walk a lot, and I'm pretty good at table tennis. I have a degree in Radio, TV, and Film Production with a minor in Music Composition and a diploma in Computer Programming, and I can speak a bit of Spanish, French, and Russian. And, of course, I am fluent in British, American, and Yorkshire English.

Reviews of The Hat Club by JC Mitchell

Find out what happens when Eve uses an Evolvit™ Smart 3D Printer/Scanner/Copier to scan a 2D drawing of an Impossible Trident, curious to see the printed 3D/4D object materialize. Does this confuse the Evolvit to the point of a software malfunction?

Witness the effects of the Evolvit printing mechanism gone haywire, which includes an episode with a perpetually expanding wedding doughnut that is reminiscent of the 1958 Science fiction/cult film The Blob. Be taken on a whirlwind journey that begins in SoCal USA; with stops made in Sheffield, England, the Falkland Islands, Redmond, Washington, and Boston, Massachusetts, among others places. Will the Hat Club members be able to stop the chaos and impending doom? Or, is a dystopian future inevitable.

The gentle absurdist humor of JC Mitchell’s "The Hat Club" is reminiscent of the writing of Douglas Adams, Kurt Vonnegut, and Tim Robbins. I enjoyed it immensely.

You have subscribed to alerts for JC Mitchell.

You have been added to JC Mitchell's favorite list.

You can also sign-up to receive email notifications whenever JC Mitchell releases a new book.