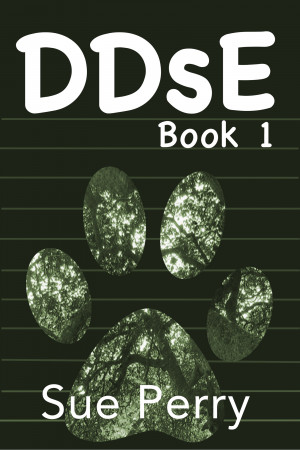 By Sue Perry
Rated 4.00/5 based on 3 reviews
A girl, a boy, a feral cat, pursuit by unhuman things. Love, tragedy, adventure, and danger unfold in the diary of a 16yo girl. More
Being sixteen is Tupac Eminem. Ella has no one to talk to except her new diary, which she has to hide from Ma and Pa Warden, the foster parents she’s stuck with since her family got flattened in a car accident. Now that she lives with the wardens, she has to switch to a new school, where people act like her tragedy is contagious. Her new suburb is just as boring as the last, and offers no hope of secret passageways or magic. But life is not all bad. There’s an interesting boy at the new school – although his family turns out to be impossibly dangerous. And there’s a feral cat, living in the suburb’s only open space, a pitiful excuse for woods. Sometimes the cat invades Ella’s mind. She tells her diary, ‘I’ve gone a special kind of crazy, a split personality. And my other personality is a cat, not a person.’
Download: epub mobi (Kindle) pdf more Online Reader
lrf pdb
Price: Free! USD
Add to Library
Create Widget
Tags: horror cat diary teens in love cat fantasy urbanfantasy teen heroine teen age girl
About Sue Perry

I liked the idea that the story unfolded through Ella's diary entries, and the reader was dropped into the middle of the tale and had to figure out what was going on. But... to use that particular device effectively, you have to have enough hints for the reader to pick up the context, and I never managed to figure out why Ella was imprisoned. And when it got into the love interest with the dark and mysterious secret past, I lost interest. I also wasn't impressed with where the story breaks between Book 1 and Book 2, because Book 1 didn't bring any part of the story to any sort of a close. There was no conclusion to any of the story threads, and to my mind if you're going to end a book you have to either tie up at least *one* loose end or have it like Harry Potter, where it's very open-ended at the end of Book 4 but the structure of each book being set up around a single school year means that it can still be concluded - even though everything's still open - without feeling like someone's just taken an axe and chopped the story into two randomly-selected bits.

The link with the feral cat was an especially good bit. I liked the feral cat, particularly as Perry's managed to give it a different "voice".that does actually sound like it could belong to a feral cat. But it got subsumed in the teenage girl crushing on mysterious boy, and in Book 2 it got lost still further on mysterious boy's dark past catching up with him and Ella. I quit reading entirely about a third of the way into Book 2. So there is a possibility that it improved after that... but considering that it started fairly well and deteriorated from there on, I doubt it.

Maybe I simply wasn't the right audience for this book. Other people have reviewed it with five stars. But from reading the beginning, I had middling-high hopes for it, and it never delivered. The beginning, the feral cat, and the author attempting to tell a tale at second-hand through diary entries (which isn't easy) kept this from being a one-star book. The teenage crushing on person with dark and mysterious past and the failing to live up to the promise of the diary-entry premise kept this from being able to reach any more than two stars.

It could have been great.

DDsE book 1
Ella's adventures are compulsive reading and I cant wait to get my 'claws' into book 2. A fast read written in a stylishly different manner that fantasy and young adult readers are sure to love.

This is an unusual and compelling young adult novella in the form of Ella's Diary exerpts, which are sad, complicated and interesting. Perry really pulls the reader into the life of Ella which is filled with loss and strangeness or rather danger and magical mystery. This is a gripping tale of two teens and a feral cat embarking or rather fleeing who knows what.......Suffice to say I can't wait to find out whats in in store for this trio.