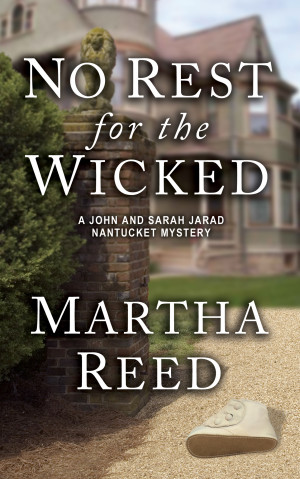 Sarah Jarad has a slightly different life focus. Halfway through a twin pregnancy, Sarah is convinced that she is losing her mind. She can’t shake the feeling that she’s being watched. She’d like to blame her paranoia on raging hormones, but that doesn’t ring true. Sarah fears that her control freak ex-fiancée Mason has finally tracked her down, and that Mason is on Nantucket, plotting revenge.

As John pursues the Baby Alice investigation, myriad family scandals emerge from the Spenser’s privileged and gilded past. Events flare white-hot when a copycat criminal snatches a second child. John and Sarah must race against the clock to unmask the kidnapper and expose these modern day threats.

Offering an array of colorful island characters and an intricate plot filled with surprising twists and reveals, NO REST FOR THE WICKED promises to be the perfect summer beach read.

Martha Reed is the award-winning crime and mystery fiction author of the John and Sarah Jarad Nantucket Mystery series.

Book One, THE CHOKING GAME, was a 2015 Killer Nashville Silver Falchion nominee for Best Novel/Traditional Mystery. Book Two, THE NATURE OF THE GRAVE, won an Independent Publisher IPPY Honorable Mention for Mid-Atlantic Best Regional Fiction. Book Three, NO REST FOR THE WICKED, was nominated for a 2017 Independent Publisher IPPY award in the Mystery/Cozy/Noir category.

Martha's short fiction and articles have appeared in Pearl, Spinetingler, Mysterical-e, and Mystery Readers Journal. Her story STRANGLER FIG appeared in LUCKY CHARMS: 12 Crime Tales, an anthology produced by the Pittsburgh chapter of Sisters in Crime, Inc. (SinC). Martha recently completed a 4-year term as the National Chapter Liaison for SinC. She adores travel, big jewelry, and simply great coffee, and delights in the antics of her family, fans, and friends, who she lovingly calls The Mutinous Crew.

About the Series: A John and Sarah Jarad Nantucket Mystery

Nantucket police Lieutenant John Jarad is deeply rooted in the charming island home his family helped to settle. Sarah is a gifted painter from Pittsburgh, running from her blistered past and looking for a safe haven, a place of rest. Together, they forge their investigative talents to solve a sinister island conspiracy. Offering a riveting plot with a cast of colorful characters, this mystery series promises to be the perfect summer beach read.

Also in Series: A John and Sarah Jarad Nantucket Mystery

You have subscribed to alerts for Martha Reed.

You have been added to Martha Reed's favorite list.

You can also sign-up to receive email notifications whenever Martha Reed releases a new book.