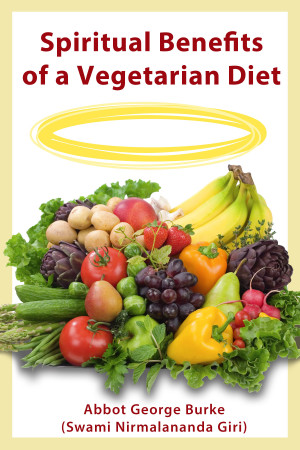 Spiritual Benefits of a Vegetarian Diet

Although diet is commonly considered a matter of physical health alone, since the Hermetic principle “as above, so below” is a fundamental truth of the cosmos, diet is a crucial aspect of emotional, intellectual, and spiritual development. For diet and consciousness are interrelated, and purity of diet is an effective aid to purity and clarity of consciousness.

The purification of our subtler levels depends upon the purification of our physical entity. This makes sense when we realize that all that goes to constitute a human being is formed of energies of various types, and the only source of energy is that which is brought into the body through sunlight, air, and food. And it is material food that provides by far the greatest amount of the energy from which our multilevel complex is shaped.

When we realize that any physical object has all the levels which we do, namely, the physical, biomagnetic, sensory, intellectual and will bodies, we can understand the importance of the kind and quality of food we eat. For not only does the physical substance of the food become assimilated into our physical body, so also do the subtler energies become united to our inner levels.

The Spiritual Benefits of a Vegetarian Diet explains in detail about how diet affects not only the body, but the mind, the will, higher perceptions, and conscious evolution, all of which are so important for an effective spiritual life.

The next section, Christian Vegetarianism, continues with a consideration of the esoteric side of diet, as well as the vegetarian roots of early Christianity, as well as an insightful exploration of vegetarianism in the Old and New Testaments.

The Spiritual Value of Vegetarianism

The major thing to keep in mind when considering the subject of vegetarianism is its relevancy in relation to our explorations of consciousness. We need only ask: Does it facilitate my spiritual growth–the development and expansion of my consciousness? The answer is Yes.

In his many pilgrimages to India, he had the opportunity of meeting some of India’s greatest spiritual figures, including Swami Sivananda of Rishikesh and Anandamayi Ma. During his first trip to India he was made a monk of the ancient Swami Order. In the United States he also encountered various Christian saints, including Saint John Maximovich of San Francisco and Saint Philaret Voznesensky of New York. He was consecrated a bishop in 1975 in the St. Thomas Christian lineage.

He has written extensively on these and other topics, many of which are posted at OCOY.org. Of major significance are: The Christ of India, The Breath of Life: The Practice of Breath Meditation According to Hindu, Buddhist, Taoist, Jewish and Christian Traditions, The Yoga of the Sacraments and his various commentaries on Indian texts including the Bhagavad Gita and the Upanishads.

Veggie life is good-too bad book is not longer

You have subscribed to alerts for Abbot George Burke (Swami Nirmalananda Giri).

Would you like to favorite Abbot George Burke (Swami Nirmalananda Giri)?

You have been added to Abbot George Burke (Swami Nirmalananda Giri)'s favorite list.