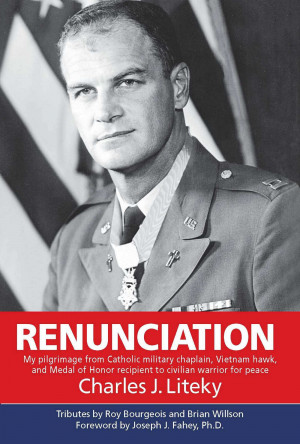 Renunciation: My Pilgrimage from Catholic Military Chaplain, Hawk on Vietnam, and Medal of Honor Recipient to Civilian Warrior for Peace

Daniel Ellsberg (former U.S. Marine company commander and defense analyst who released "The Pentagon Papers"): I met Charlie Liteky on the steps of the Capitol in 1986 when I joined him, Brian Willson, Duncan Murphy and George Mizo for the last thirteen days of their 47-day water-only fast protesting the wrongful US war against Nicaragua. When he and I, both in Vietnam in 1966-67, had yet to recognize that the US war against the Vietnamese was itself wrongful, he earned the Medal of Honor by unexcelled battlefield courage. He went on to a life of unexcelled moral courage, in his singular renunciation of the Medal twenty years later and in earning federal prison sentences for protesting the Army's School of Torturers at Ft. Benning. In the month of his death, Charlie Liteky leaves us a book that has never in our lifetimes been more urgently needed in America, to inspire courageous, conscientious resistance to both ongoing and newly wrongful policies. What a story! What a parting gift he leaves us!"

Fr. Roy Bourgeois (former U.S. Naval officer in Vietnam, Catholic priest and missionary, and founder of School of the Americas Watch): "In these challenging times, people are searching for inspiration and hope. Charlie Liteky's transformation—from wounded warrior in Vietnam to internationally known war resister—has touched the lives of many in deep and profound ways."

Margaret Knapke (peace activist prosecuted with Charlie Liteky and others in 2000 for "crossing the line" at Ft. Benning, Georgia): "Charlie Liteky's heroism in Vietnam is legendary. His courage while saving the lives of numerous comrades is almost beyond belief, and he was awarded the Congressional Medal of Honor for it. But I'm even more impressed by Charlie's moral heroism—although he would never call it that. This book recounts, in his own words, the process by which Charlie became a conscious, nonviolent warrior for peace."

S. Brian Willson (former U.S. Air Force officer, Vietnam veteran, and author of "Blood on the Tracks"): "Charlie Liteky is one of a kind. Renouncing his Congressional Medal of Honor in protest of US policies, for three decades he consistently and tenaciously expressed his conscience condemning egregious US polices, at home and abroad, inspiring countless people to escalate their own actions of dissent in a country gone stark raving mad."

Sr. Megan Rice (former missionary in Africa who has been arrested almost forty times in protests against nuclear weapons): "This is Charlie's story, really 'his-story', made available for present and future generations. It proclaims vividly Charlie's honoring the universal mandate to live and to act for the common good. The Liteky brothers (Charlie and Pat) acted in accordance with common sense, with which each of us is endowed, but to which, at times, we may not always be listening. Read this book!"

Charlie Liteky is a former Catholic priest and military chaplain who was awarded the Medal of Honor in Vietnam, a war he ardently supported. In his late thirties Charlie came to form his own conscience on war and to know more about the ill effects of U.S. policies in Central America and, later, in Iraq. Turning from a war hawk to a civiliam peace activist, Charlie became the only Medal of Honor winner to renounce the honor and return his medal to President Reagan.

You have subscribed to alerts for Charles Liteky.

You have been added to Charles Liteky's favorite list.

You can also sign-up to receive email notifications whenever Charles Liteky releases a new book.