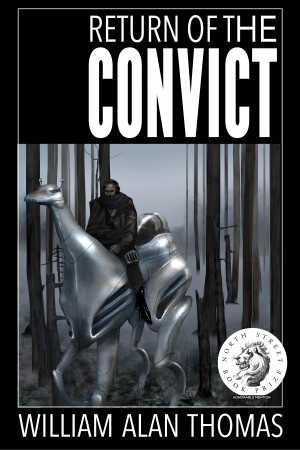 Return of the Convict

By William Alan Thomas
Lucas, a terminally ill convict, escapes from Mars and returns to Earth for treatment. Dom, his young clone,is a space cadet whose brain is being transformed through implants. Soon he and Astra, the love of his life, will be part of the ruling technocracy. For Lucas, Dom's brain implants are the avenue for a life-saving mind merger. He'll do anything to make that happen. More
This story takes place in 2143, in the aftermath of wars, plagues, and environmental breakdown. A technocrat world government works closely with Raina, an advanced artificial intelligence whose purpose is to recreate the Earthly paradise.
Dom Tessier is a cadet at Vancouver's Space Training Academy. Brain implants have enhanced his memory, and speeded up his learning processes. In another year he's to be fully telepathic, and work off-world as an administrator.
. Lucas, the benefactor who paid for Dom's education, is a convict who's returned from Mars after becoming deathly ill. Dom is Lucas's clone, and the brain implants provide the avenue for a mind merger which could give Lucas another chance at life.
Unfortunately for Dom, this merger would make him a prisoner in his own body. In the struggle to preserve his autonomy, all Dom's beliefs about the society he's been raised in are called into question.
Available ebook formats: epub mobi pdf lrf pdb txt html
First 20% Sample: epub mobi (Kindle) lrf more Online Reader
pdb
Price: $0.99 USD
Buy Add to Library Give as a Gift
How gifting works
Create Widget
Tags: artificial intelligence clones telepathy scifi adventure brain implants future crime space cadet postapocalyptic adventure cerebral scifi mind merger
About William Alan Thomas

William Alan Thomas took a BA in English at the U. of Chicago in the 1960's, and and his first novel, Daddy's Darling Daughter, was published in 1974. Life was to sweep him far from the world of books, as he fell in love with the seafood business, acquired an old fishing boat, and then became a Vancouver longshoreman.
Presently a full-time writer living in Chilliwack, B.C., he's just completing the rewrite of Dangerous Vision, a corporate espionage thriller involving Cold War style remote viewing, written while he was still working at the docks. He remains deeply involved with Return of the Convict, as there's to be a prequel and two sequels.

Reviews of Return of the Convict by William Alan Thomas

You have subscribed to alerts for William Alan Thomas.

You have been added to William Alan Thomas's favorite list.

You can also sign-up to receive email notifications whenever William Alan Thomas releases a new book.