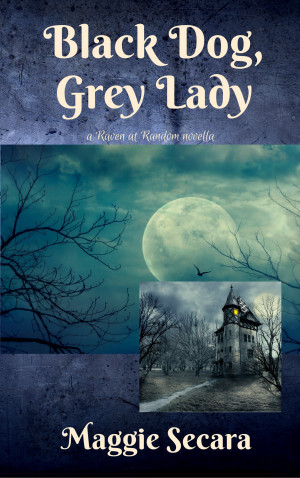 By Maggie Secara
The village of Combe Beckett is beset by the spirit of a monstrous fiery eyed black dog on a rampage to attack and kill their children. Their only hope lies in the elegant person of their landlord, a mysteriously magical country gentleman. Mr Random Corwyn, in company with Miss Violet Delacourt, a genteel lady novelist, must find and somehow vanquish the unseelie terror before it kills again! More
From a quiet English valley where nothing uncanny ever happens, the mysteriously magical Mr Random Corwyn leads a team of paranormal investigators in vanquishing supernatural horrors haunting England’s green and pleasant lands. But this time Random's own house is haunted by a sorrowing lady. Genteel lady novelist Violet Delacourt is still recovering from a terrifying ordeal with a fiery Djinn. And a monstrous black dog is marauding through their corner of Devon, preying on the people they have sworn to protect

Mr Corwyn is Not Amused.

A new adventure for the beloved King's Raven of Faerie.

Maggie Secara started out wanting to be an archaeologist. Then a reporter, then an international spy, a poet, an opera singer, a novelist, a historian. She ended up being a bit of each, earning a Masters in English and becoming involved with historical costume and improvisational theatre. When all those passions came together at once, she decided to be a novelist again, and so she did. Her short fiction has appeared in a variety of publications, including New Realm and Unsung Stories magazines, and she recently started work on a Victorian fantasy series. Maggie lives in Los Angeles, California, with one adoring husband, two goofy cats, four magical novels, and half a million English words to toy with.

You have subscribed to alerts for Maggie Secara.

You have been added to Maggie Secara's favorite list.

You can also sign-up to receive email notifications whenever Maggie Secara releases a new book.