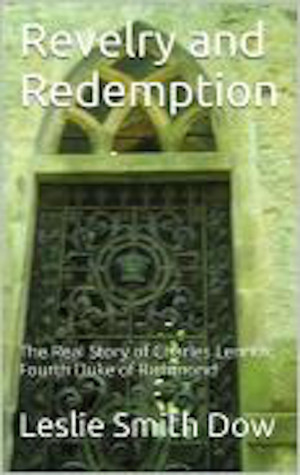 Revelry and Redemption: The Real Story of the Death of Charles Lennox, Fourth Duke of Richmond

As a rock 'n' roll journalist for several years, I interviewed and reviewed acts like Alice Cooper, Iron Maiden, BB King, James Cotton, Supertramp, Axl Rose, Tragically Hip, Ria Mae, and many more. Somehow, the weirdness of writing concert reviews at 3 a.m. in an empty newsroom just never left me. That experience, combined with growing up in a very insular but sinful small town, and the strange events that occur during frequent travelling has left me permanently warped. My only outlet is the Badass Bingo gang, who figure prominently in the Badass Hippie Tales series. They have really got a hold on me! Check out Ricki Wilson's Indie Spotlight: http://rickiwilson.com/4/post/2017/03/indie-spotlight-on-badass-hippie-tales-by-leslie-smith-dow-lesliesmithdow.html

I am the author of several print and e-books including the award-winning historical biographies Adele Hugo: La Miserable and Anna Leonowens: A Life Beyond the King and I. Adele Hugo: La Miserable has recently been re-released as an e-book, with a new Afterword detailing the fascinating mystery of a painting which could link Adele and the founder of French Impressionist painting, Edouard Monet.

Read Elissa Barnard's review of the re-issued e-edition of Adele Hugo in www.localxpress.ca at https://www.localxpress.ca/local-arts-and-life/adele-hugo-still-haunts-author-443323. See details of the new Afterword, featuring the mystery of Adele and French painter Edouard Manet at https://gooselane.com/collections/e-books/products/adele-hugo.

I am also a beekeeper, farmer and owner of Red House Honey, which produces all-natural raw, kosher honey on the shores of the St. Lawrence River.

AWARDS/JURIES: I received the Canadian Authors' Association Air Canada Award for Most Promising Canadian Author under 30 and the Dartmouth Writers’ Award for Non-Fiction. I was a finalist for the Ontario Trillium Award, the Ottawa Citizen and Regional Municipality of Ottawa-Carleton writing awards. I have received grants for my writing from the Canada Council, the City of Ottawa and the Regional Municipality of Ottawa-Carleton and I have been part of selection juries for writing grants and the on-line poetry magazine, ByWords.

You have subscribed to alerts for Leslie Smith Dow.

You have been added to Leslie Smith Dow's favorite list.

You can also sign-up to receive email notifications whenever Leslie Smith Dow releases a new book.