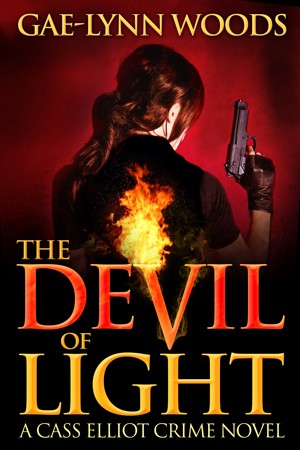 By Gae-Lynn Woods
Rated 5.00/5 based on 2 reviews
Small towns bury their secrets deep...

Cass and her partner Mitch Stone delve into a cunning world of blackmail and violence – and find a cult concealed for nearly a century beneath the genteel, small town façade of Arcadia in East Texas. Their investigation triggers a brutal response from powerful men who will protect their identities at any cost. They unleash a ruthless killer whose actions create a media frenzy and destroy the fabric of trust within the police department.

Cass and Mitch circle closer to the cult’s few members, following a slim lead into a night lit by fire. A night that begins with a blood ritual and ends with Cass holding a man's life - or death - in her hands and struggling to walk the fine line between vengeance and justice.

Gae-Lynn Woods is a Texan who has traveled the world, lived overseas, and come back home. She and her husband, British jazz guitarist Martyn Popey, share a ranch in East Texas with a herd of Black Angus cattle, one very cranky donkey, and The Dude, a rescue kitty who now rules the world.

THE DEVIL OF LIGHT and AVENGERS OF BLOOD are the first two books in the Cass Elliot crime series. A CASE OF SOUR GRAPES is a companion novel to the series featuring Cass’s best friend, shoe and handbag loving Maxine Leverman.

When she's not playing the roadie, tending to cows, fixing fence, or digging post holes, Gae-Lynn is working on the next Cass Elliot novel.

I began reading Gae-Lynn Woods’ The Devil of Light in January, at about the same time I started watching True Detective on HBO, the gritty series starring Woodie Harrelson and Matthew MacConaughey, and was immediately struck by the similarities between the two stories.

Both stories feature victims of ritual murders, corpses found in bizarre poses and clues pointing to occult behaviours. Both stories also hint at a circle of sexual abusers of children, men who use their powerful positions in their communities to cover up their crime and enforce the secrecy of their cults.

And a further connection between the two: True Detective is set in the Louisiana coastal plain, just across the state border from east Texas, where you could find Arcadia, the setting of The Devil of Light.

This novel bears an uncanny resemblance to Project Truth, a police investigation in Cornwall, Ontario of a suspected ring of child abusers, men, including priests, who traded their child victims among themselves.

I was so struck by all the similarities that I even emailed Gae-Lynn Woods, author of The Devil of Light, to tell her about it. She responded that she had not watched True Detective, nor heard of Project Truth, but she was going to look into both.
But this post is a review of the novel by the independent author from east Texas, so let’s concentrate on that.

The story: A complex series of murders
The Devil of Light begins with a drifter, who adopts only the name Hitch, ritualistically killing an unnamed victim at the behest of an “old man.” Cassandra “Cass” Elliot and her partner, Mitch Stone, are assigned the investigation, which is hampered because the body has no identification. They suspect it’s a missing migrant worker, but before they can make much progress, a local businessman and hobby farmer, Lenny Scarborough, is murdered by his long-abused wife in a spectacular, if very rural way — she drives the spikes of a hay loader through his chest.

In Scarborough’s house, the detectives discover the motive of the murder: photographs of men having sex with young girls and with other men. All the shots are very close-up and show no faces; scars in one picture, though, match the murder victim’s body. It seems Angie, Lenny’s long-abused wife, had discovered the photos while Lenny was working in the cow barn, and that was enough to channel the anger from years of physical abuse into driving the specialized fork-lift truck through her husband.

The photographs lead the police to suspect their idyllic town harbours a ring of pedophiles, and the investigation indeed uncovers it — a ring comprising some of the most powerful and respected men in the community.

This being a crime novel, the bodies begin to pile up, as do layers of secrets and conspiracy.

Where a writer’s skill is critical
Woods is a skilled and talented author. She creates detailed and believable characters, people readers can picture and hear. The main character, Cass Elliot — who insists that the coincidence of her name with that of the late singer from the Mamas and the Papas is really nothing more than a coincidence — has an interesting back-story including rape and a scar around her breast, as well as an older brother serving a long jail sentence for something he may not have done. But Woods knows how to keep the back-story from bogging down her plot, and brings out details when they’re needed, just enough to keep us turning pages (or swiping the e-reader screen) to find out more.

Very few weaknesses
There are a lot of characters in this book, and sometimes it’s hard to keep them all straight — especially the younger minor policemen, most of whom seem to be blond and athletic. This is in opposition to most of the baddies, who in addition to sharing a compulsion to sexually abuse young people, share a propensity to obesity.

The family and social links among the police, suspects, victims and those who discover the bodies also get thicker and more tangled, enriching rather than confusing the story.

The main characters are clearly drawn and consistently presented — except for the main bad guy. The author never names him, and provides only enough detail to make us suspect he could be one of two people in Arcadia.

Overall, an enjoyable and thought-provoking novel
While this novel has an enthralling climax and satisfying conclusion, it did not solve the mystery or end the story. Again showing her writing skills, Gae-Lynn Woods leaves us on the last page of The Devil of Light with a reason — no, a need — to buy the sequel, Avengers of Blood.

Gae-lynn Woods is a magnificent writer!!! She tells a story in a way that brings it's surroundings and the characters to life and in full view!
I felt as if I was watching one of the most exciting movies ever written!!!
I gave myself a week to read this book, but I couldn't stop reading and finished in 2&1/2 days!!!
It's too exciting, mysterious and I just loved the ending so much!!! It was one heck of a finale!!!
Thank you Gae-lynn for the fantastic entertainment!!! :-D
I was a lil scared, but I didn't care! It was too good to put down!!!

(reviewed the day of purchase)
Sue Smith reviewed on July 20, 2011
(no rating)
Excellent. Did not put it down until the last page.

You have subscribed to alerts for Gae-Lynn Woods.

You have been added to Gae-Lynn Woods's favorite list.

You can also sign-up to receive email notifications whenever Gae-Lynn Woods releases a new book.