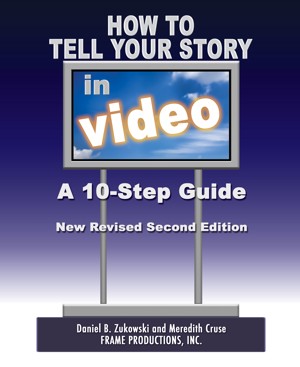 How To Tell Your Story In Video: A 10-Step Guide

By Daniel Zukowski
More than ever, business relies on the power of video to communicate, sell products and train people. Written by marketing and entertainment industry veterans, "How To Tell Your Story In Video" helps corporate managers with its straightforward 10-step guide. The authors, owners of an award-winning production company, help you avoid pitfalls, manage resources and produce a video you'll be proud of.

Dan Zukowski is the co-founder of Frame Productions, an award-winning content development and video production company. A 25-year media industry professional, he has extensive experience in marketing communications, journalism, and public relations along with video and multimedia production.

Zukowski scripts the majority of the company’s projects and is intimately involved in the post-production process, developing creative and design concepts and overseeing all post-production. He has written and produced numerous projects for Honda, Hyundai, Mitsubishi, Coors, Verizon Wireless, Littler Mendelson, Sony, Shell, Carlson Marketing, Kia and Kawasaki.

A former vice president with a large L.A.-based strategic communications agency, he understands corporate goals, business strategy and marketing, and has consulted for CEOs and high-level management teams.

Zukowski’s byline has appeared in major daily newspapers and national magazines. He served as New York Editor for the Ward’s family of automotive trade publications and has also served as senior editor of numerous corporate publications.

You have subscribed to alerts for Daniel Zukowski.

You have been added to Daniel Zukowski's favorite list.

You can also sign-up to receive email notifications whenever Daniel Zukowski releases a new book.