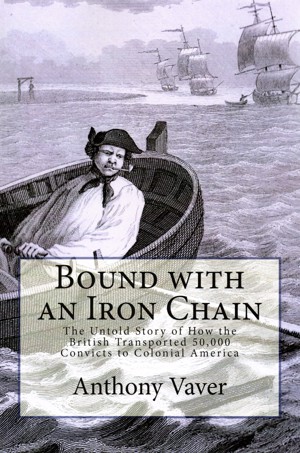 Bound with an Iron Chain: The Untold Story of How the British Transported 50,000 Convicts to Colonial America

Most people know that England shipped thousands of convicts to Australia, but few are aware that colonial America was the original destination for Britain's unwanted criminals. In the 18th century, thousands of British convicts like Bell were separated from their families, chained together in the hold of a ship, and carried off to America. What happened to these convicts once they arrived? Did they eventually prosper in an environment of unlimited opportunity, or were they ostracized by other colonists and doomed to live in poverty?

Anthony Vaver tells the stories of the petty thieves and professional criminals who were subjected to this unique punishment, and in bringing to life this forgotten chapter in American history, he challenges the way we think about immigration to early America. The book also includes an appendix with tips on researching individual convicts who were transported to America.

Anthony Vaver is the author and publisher of EarlyAmericanCrime.com, a website that explores crime, criminals, and punishments from America’s past. He holds a Ph.D. from the State University of New York at Stony Brook and an M.L.S. from Rutgers University, and he is currently working on a new book about early American criminals. He has never spent a night in jail, but he was once falsely accused of shoplifting.
Available ebook formats: epub mobi pdf rtf lrf pdb txt html
First 20% Sample: epub mobi (Kindle) lrf more Online Reader
pdb
Price: $6.99 USD
Buy Add to Library Give as a Gift
How gifting works
Create Widget
Tags: punishment immigration convicts eighteenth century convict transportation genealogy colonial america emigration history 1700s crime history history british
About Anthony Vaver

I am the author of "Early American Criminals" and the Amazon bestseller, "Bound with an Iron Chain: The Untold Story of How the British Transported 50,000 Convicts to Colonial America." I am also the author and publisher of EarlyAmericanCrime.com, a website that explores crime, criminals, and punishments from America’s past. I have a Ph.D. from the State University of New York at Stony Brook and an M.L.S. from Rutgers University.

Reviews of Bound with an Iron Chain: The Untold Story of How the British Transported 50,000 Convicts to Colonial America by Anthony Vaver

Review
Ed Belcher reviewed on Jan. 23, 2013
(no rating)
When I asked my Dad about our ancestors, he smiled and said not much was known. He said our ancestors may have come over from debtors' prison. "Bound with an Iron Chain" looks at immigration from the 1600's to 1776. It points out that 75% of immigrants by 1775 were either slaves (47%), transported convicts (9%) or indentured servants (18%). Only 25% were "Freeman" that paid their way over and started off as farm or plantation owners, government workers, or business owners. Convicts and Indentured Servants got a small amount of money and sometimes land when their service (or term) was complete. As land was taken in Virginia, South Carolina, and Maryland where the majority of them worked on tobacco plantations, the convicts and servants moved west including Kentucky where my ancestors were farmers with plots of tobacco as a cash crop.

The work is well documented and the narrative is far from dry for it weaves individuals' stories taken from newspapers, books, and records to illustrate the flow from crime in Britain, transportation by ship and work in the colonies. A history I had never known, found fascinating and possibly a view of my past.

You have subscribed to alerts for Anthony Vaver.

You have been added to Anthony Vaver's favorite list.

You can also sign-up to receive email notifications whenever Anthony Vaver releases a new book.