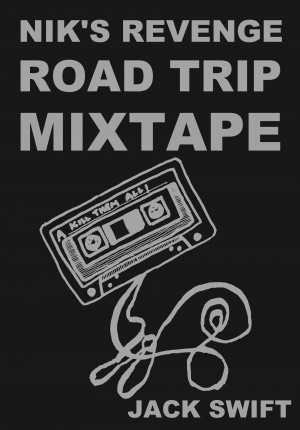 Rated 4.50/5 based on 2 reviews
Recovering junkie Nik hits the road, seeking revenge on those who wronged him. But cross-country killing sprees are complicated when your car is haunted, your 12 Step sponsor won't stop calling, and your targets lack the grace to be straight-forward monsters. More
Nik is a recovering junkie with some heavy baggage. When sober life fails to inspire, he trades in his 9 to 5 for the open road. Armed with a gun and the perfect mixtape, he's out to settle some scores.

But revenge is more complicated than he expected. For one thing, his car is haunted. Plus his 12 Step sponsor keeps calling him, and it's getting hard to keep his lies straight. Then a monster bag of heroin practically falls into his lap, which Nik finds... distracting. Worst of all, his targets don't even have the grace to be straight-up monsters.

It's a lot to deal with-- especially when, between the flashbacks and the nightmares, Nik can hardly tell the past from the present...
Available ebook formats: epub mobi lrf pdb
You set the price! USD
Buy Add to Library Give as a Gift
How gifting works
Create Widget
Tags: gay addiction lgbt drugs revenge music rock n roll transgender trans lgbtq
About Jack Swift

Jack Swift is a writer and musician native to the San Francisco Bay Area. He lives with his boyfriend and three black cats. As Johnny Truant, he is the frontman of SF post-punk band The Truants and bassist for Cardiac Dream. He edits Cruising for a Bruising: The Premiere Shitty Zine for Violent Queers under this name as well.

Very interesting, well worth reading - a revenge story set in the American punk scene, in something like the present day.

Nik, a recovering heroin addict sets out on a road trip to kill a bunch of punk douchebags. For the first couple of chapters it's not explicitly clear what gender Nik actually is. Then it's revealed that Nik has transitioned from a woman and now identifies as a homosexual male.

I felt this added a level of complexity that the novel didn't really need. It was already overflowing with good ideas. Also I felt like the gender issues were only superficially explored. There are pages and pages about heroin, surely the gender-transition deserves a bit more attention? I can't help but think this would have been a tougher/better book if Nik was female all the way through.

The other criticism I have is that the ending is a little of an anti-climax. Throughout the book we have a building up of this Harley character into something like a mythical sociopath, that Nik must confront and defeat. Then we get to the end and surprise - Harley has changed and become a real nice guy. In fact, Nik is the sociopath. There's no final conflict.

What else? I really liked the descriptions of the punk scene. I liked the character of Lori a lot. Some of the murders were quite gratuitous and creative in a good way. In contrast I felt there wasn't anything particularly original about the heroin subplot and I thought Nik blabbed on about it way too much.

I have probably sounded critical so far. However I really liked this book. It caught my attention and I wanted to know what would happen next. One of the best stories I've found on smashwords.

For more reviews check out: http://bench-press.blogspot.com.au/

There are so many fates and lifetimes and identities in this that it's hard to believe it's just a novella. There's not the confusion you would expect from the multiplicity of stories, either: somewhere in here is a transcendant, uniting mind, mixing and editing stories and plans like the mix tape of the title.

With the Californian setting and the drugs and the conflict between revenge and redemption, it reminds me strongly of Seth Morgan's brilliant "Homeboy," but that's a huge novel, and I grew closer to the characters over many, many pages, whereas here, Nik had me on his side from page one.

You have subscribed to Smashwords Alerts new release notifications for Jack Swift.

You have been added to Jack Swift's favorite list.

You can also sign-up to receive email notifications whenever Jack Swift releases a new book.