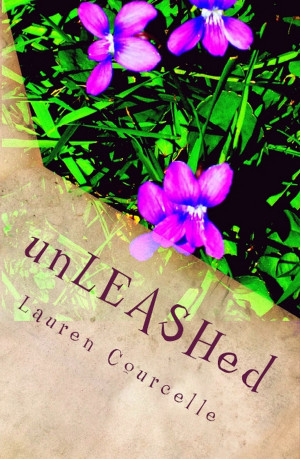 By Lauren Courcelle
On my 16th birthday, my parents died in a double homicide, and I was unceremoniously loaded into a PAR and sent off to Vermont. Vermont had just two things going for it. One, it was backwards. Two? The family I now lived with exuded love in everything they did. I had never seen love before. It intrigued me.
Better yet? They were unLEASHed... just like me.
Yanno, I just might like it here... maybe. More
Orphaned through a double homicide… check. Shipped off to Vermont to live with a rule-abiding, overprotective, middle-aged godfather and his perfect family… check. Losing a lucrative natural products business and clientele base… check. True, Karma’s threefold retribution is not the sixteenth birthday gift that Nan expects, but it’s exactly what she needs.

Cordeleya “Nan” Hammock is a self-described loner who cherishes her self-reliance, independence, and freedom, buys into conspiracy theories, and has a healthy distrust of technology. Within a month of her relocation to Vermont, she befriends the prettiest girl at the Academy, blurs the friendship line with her best friend from home, and despite her best efforts, gets suspended from her new high school… four times. But with the passage of mandatory LEASH laws, constant camera surveillance, a draft for a war she doesn’t believe in, and school personnel who pose an imminent threat, Nan just might lose it all… again.

Join the quest to live unLEASHed.

Lauren Courcelle’s Young Adult debut, unLEASHed, is the first book in a brand-new, futuristic series. It is a departure from her other books as it is intended for readers ages 14+ due to obscenities, violence, and mature situations.

Lauren Courcelle has lived in Vermont all of her life, but if she told you how many years she's been a Vermonter, you'd know how old she is, so don't expect her to admit that! At a young age, she decided she wanted to be a teacher when she grew up. In hindsight, much of her decision was initially based on her tremendous excitement at the idea of being able to write on the chalkboard whenever she wanted! As she matured, or maybe due to the inclusion of many more white boards in classrooms, Lauren realized that the best part about teaching was being able to have a daily impact on students, particularly when inspiring them to become lifelong lovers of literature.

For a few years, Lauren left the field of education, to try her hand at something else. When folks would ask her what she missed most about teaching, her response was always, "The kids, and in particular, reading great children's books with the kids!" Having always wanted to write an amazing picture book, in May, 2011, she decided to pursue her dream. Nearly 400 pages later, a chapter book, surprisingly, emerged from her efforts.

That book was "Wicked Normal," and Lauren immediately knew that it would become a series, as her characters still had so much more story to tell. Lauren released "Wicked Weird," the second book in the series, less than six months later. The third book, "Wicked Awesome," was published within a year of the first. The fourth book of the series, "Wicked Dramatic," had protagonist, Persephone Smith, embarking on her final year of middle school.

Lauren paused Persephone's series to release "unLEASHed," the first book of her first Young Adult series. Although it is a futuristic novel, she hopes it is not a psychic vision of what life will be like some twenty years (or so) from now.

On the heels of the release of "unLEASHed," Lauren returned to Persephone's series with Young Adult novels "Wicked Confessions," "Wicked Together," "Wicked Alpha," & "Wicked Omega." She's currently working on the 2nd book in Cordeleya's series (working title: "unGUARDed") and fighting off the urge to spend time right now on the next Persephone book as Imemy's tale needs to be told first! ("Imemy" is a futuristic, YA love story between the narrating protagonist and another teenager told without revealing either's gender, for love is love. Yeah. Be on the lookout for that one!)

Lauren continues to reside in Vermont, and in her leisure time, she enjoys knitting scarves, making beaded jewelry, and painting.

The Official unLEASHed Book Trailer
Cordeleya Hammock doesn't have a LEASH. With her inherent distrust of technology, she believes her privacy would be compromised by wearing one. But as LEASH laws mandate that more and more citizens are LEASHed, can Cordeleya remain unLEASHed? And at what cost? Join Cordeleya's quest to be unLEASHed in Lauren Courcelle's YA, sci-fi, coming-of-age novel, unLEASHed. #Cordeleya

You have subscribed to alerts for Lauren Courcelle.

You have been added to Lauren Courcelle's favorite list.

You can also sign-up to receive email notifications whenever Lauren Courcelle releases a new book.