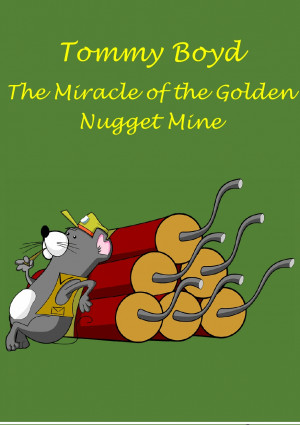 The Miracle of The Golden Nugget Mine

By Tommy Boyd
Chancer, the 'not so ordinary' Rat enjoys his greatest adventure yet on his first visit to the USA. Throw into the mix, stolen rides on boats and trains adventures and rescues down a gold mine...and all this from a talking Rat with mystical powers.

Having been born several millennia ago in Belfast, it came as little surprise when Tommy Boyd tapped into the city’s rich seafaring heritage by joining the Royal Navy, where his undoubted love all things maritime developed. Little did Tom know, that after travelling the world that he would leave Northern Ireland, a mere 174 miles at its widest point, and settle 181 miles away from his place of birth on the North East coast of England. A highly distinguished thirty-one career with the Police Service followed, after which Tom devoted himself to replacing his failing body parts, the price he paid for years of a vigorous fitness regime. Always one with a quip or humorous tale, it was only really a question of time before Tommy would turn his hand to writing. And, like all things Tom, he chose the hardest genre of all…Children’s Books. A talking intelligent, sophisticated rat with an eye for adventure…outrageous I hear you say…not really…reality can be far stranger. Aimed directly at children aged from eight to eighty, these are highly moral tales (yes tales not tails) that see truth justice and integrity prevail, oh, and with a few laughs along the way too.

You have subscribed to alerts for Tommy Boyd.

You have been added to Tommy Boyd's favorite list.

You can also sign-up to receive email notifications whenever Tommy Boyd releases a new book.