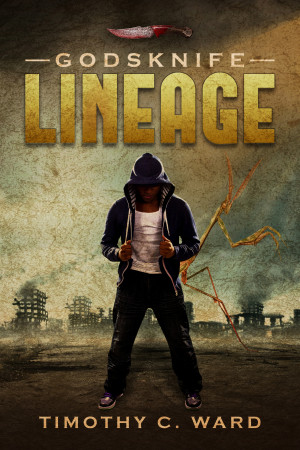 By Timothy C. Ward
A handshake and folded flag do little to console the child left behind by a parent lost to war, yet when a new enemy crashes into his world, James must find the courage of his father. A short story prequel to the novel, "Godsknife: Revolt," set during the events preceding that epic story. [Urban Fantasy, Supernatural Thriller, Post-Apocalyptic, Short Story] More
His father died saving the world from a power that's remained hidden until now. Will James unravel the mystery of his father's lineage in time to stand up to the new fight?
~~~
"Great heart and well written! Cool intro to what seems to be an incredibly violent, thrilling world – nicely done!" ~ Dave de Burgh, Author of the "Mahaelian Chronicle" Series
~~~
On the day that changes everything, James wakes up to his usual struggles: school, basketball aspirations, and the reminder of his father's death in service to his country. An unlikely friend will challenge him, offering a different perspective on the legacy left by those who've loved us, but whom we've lost. James doesn't understand how one who loves you could leave you behind, but if the answer is courage, then he doubts he has what it takes to make the same kind of decision.

Yet as a new enemy rises to the surface of their world, he must use the example set by his father, and take full advantage of the life and lineage that his father saved, and he must rise to his own challenge.
~~~
"The start of a wild ride! Did I just witness the beginning of a giant insect apocalypse?" ~ Becky Stephens, Editor and Book Reviewer
~~~
EVOLVED PUBLISHING PRESENTS a chilling, horrifying look at a world gone mad, with a short story prequel to the first book in the "Godsknife" series. It can be read as a stand-alone, or as an introduction to the life and world surrounding one of our beloved survivors in "Godsknife: Revolt." The "Godsknife" series is perfect for fans of Stephen King (The Dark Tower, The Stand), Larry Correa (Monster Hunter), Nick Cole (The Red King, The Wasteland Saga), Ted Dekker (Circle Trilogy) and Tosca Lee (Demon, The Books of Mortals). [DRM-Free]
~~~
BOOKS BY TIMOTHY C. WARD:
> Godsknife: Revolt (Book 1)
> Godsknife: Lineage (Short Story Prequel)
> Scavenger: Evolution
> Scavenger: A.I.
> Ultras
~~~
MORE GREAT HORROR FICTION FROM EVOLVED PUBLISHING:
> The "Lorestalker" Series by J.P. Barnett
> The "Big Sky Terror" Series by D.W. Hitz
> The "Writer's Block" Series by A.K. Kuykendall
> "The Sundered Oath" Series by Ciara Ballintyne
> "Memoirs of a Transferable Soul" by W. Town Andrews
Available ebook formats: epub mobi pdf lrf pdb txt html
First 10% Sample: epub mobi (Kindle) lrf more Online Reader
pdb
Price: $0.99 USD
Buy Add to Library Give as a Gift
How gifting works
Create Widget
Tags: urban fantasy short story supernatural thriller post apocalyptic end of the world portal fantasy
About Timothy C. Ward

My love for writing started while co-authoring a Ninja Turtles comic in kindergarten. Dragonlance and Stephen King influenced my middle years, and then Orson Scott Card and the "Dune Prequels" added Science Fiction to my literary palate. After college, insecurity and a lack of community led to a few years off from writing, but then I discovered NaNoWriMo and podcasts. These helped me write and rewrite what became two trunked novels, but also put me firmly in the path of realizing my dream.

I self-published my debut novel, Scavenger: Evolution last March. It’s a sand-divers in the apocalypse story of love and terror set in Hugh Howey’s world of Sand (with his permission). The audiobook is nearly complete, and the sequel will come out next summer.

My short story credits include “The Bomb in the President’s Bathroom,” an Amish science fiction thriller set in the world of Michael Bunker’s "Pennsylvania," and published in the anthology, "Tales from Pennsylvania"; “Staring Into,” a time-travel love story published in "Masters of Time"; and “Marigold Bloom,” an as-yet published story in a redshirts-themed anthology, "Expendable Assets," which will donate proceeds to The Intrepid Fallen Heroes Fund.

My first Evolved Publishing novel is a magical thriller set in the rift between Iowa and the Abyss, inspired by equal parts of Stephen King’s "Dark Tower" series and "The Stand."

I am also a former Executive Producer for the Hugo-Nominated podcast, Adventures in SciFi Publishing, and have reviewed books for them and SF Signal.

You have subscribed to alerts for Timothy C. Ward.

You have been added to Timothy C. Ward's favorite list.

You can also sign-up to receive email notifications whenever Timothy C. Ward releases a new book.