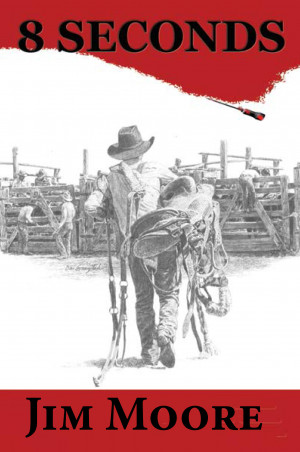 By Jim Moore
In 1950, the world of a young rodeo bronc rider from Montana State College is rocked when he is charge with of the crime of murder in the first degree—the murder of a close friend and fellow rodeo participant. In a rush to judgment, the sheriff of Park County, Montana has made up his mind that Cassius Bruce is responsible for murder of Summer Hetherington at Hunter's Hot Springs. Cassius Bruce is More
A rodeo bronc rider must stay astride his horse for 8 seconds in order to qualify. Cassius Bruce, a senior at Montana State College in 1950 can usually do just that, both in bareback and saddle bronc competitions. He enjoys every aspect of rodeo until the news of the murder of a lovely coed who was his friend and fellow rodeoer reaches him. The coroner says her death occurred in fewer than 8 Seconds.

Cass is stunned when he realizes he is the prime suspect in the crime of murder in the first degree, and his life is rocked for far longer than 8 Seconds. How can he defend himself when there are no clues to the real killer?

Jim Moore came from a home where reading was encouraged. His parents both enjoyed books so the house was filled with reading material, which he took advantage of from a young age.

Along the highway from his family ranch near Two Dot, Montana to Bozeman, the old Jawbone road bed is visible at places. In passing by, it often occurred to him that a good yarn could be wrapped around the story of the railroad. About twelve years ago, he decided to see if he could write it. Thus came into being Ride the Jawbone.

Other published titles by Jim Moore include: Election Day, The Body on the Floor of the Rotunda, and The Whole Nine Yarn, a compilation of nine of his short stories, and The Jenny. Another legal thriller, 8 Seconds, is slated for publication in 2017.

Jim Moore has spent his life as a cattle rancher and a lawyer. He was raised and spent most of his life on the Moore ranch near Two Dot, Montana. His father brought a World War I airplane—a Curtis JN4 Jenny—to the family ranch in 1920 and barnstormed the state. Those experiences, as told to his son, seemed a proper basis for a legal murder mystery. An attractive young woman as the one with the flying machine made for a better yarn.
Now retired, Jim lives quietly with his wife, Kay, on their farm south of Bozeman, Montana. He continues to write legal murder mysteries.

Reviews of 8 Seconds by Jim Moore

You have subscribed to alerts for Jim Moore.

You have been added to Jim Moore's favorite list.

You can also sign-up to receive email notifications whenever Jim Moore releases a new book.