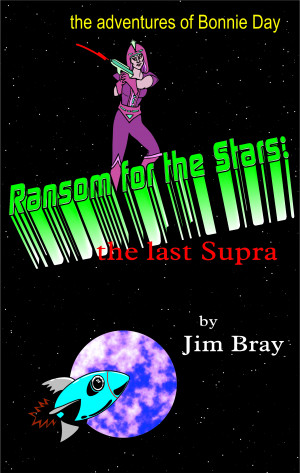 Ransom for the Stars

By Jim Bray
Rated 4.00/5 based on 1 reviews
A sci-fi action adventure tale of interstellar agent Bonnie Day and her mission to rescue kidnapped peace emissaries. More
Bonnie Day had walked way from life as Supra 9, a Troubleshooter for The Club, determined never to return. But just as she was beginning to enjoy being a private citizen, ambassadors from two warring planets were kidnapped on their way to a peace conference, setting off a galactic emergency that could only be resolved by The Club. Unfortunately, someone had been killing off all the other Troubleshooters, and Bonnie Day found herself pulled back into that world against her will, forced to take on one final assignment, a mission that would lead her through the vast reaches of space that make up the galactic Co-operative.

First 20% Sample: epub mobi (Kindle) lrf more Online Reader
pdb
Price: $1.99
Free! USD
Buy with coupon Use the code AG100 at checkout to get this book for free during our site-wide promotion!
(Offer good through May 31, 2020 )
Have a better coupon?
Add to cart, then apply your coupon
Add to Library Give as a Gift
How gifting works
Create Widget
Tags: science fiction fiction spy fiction female action fiction adventure sf
About Jim Bray

Jim Bray has been a professional writer for more than three decades. His car and technology columns have been syndicated worldwide and his nationally broadcast technology-related commentaries were heard on CBC Radio One as well as on various private broadcasters. Jim has also owned and operated his own businesses. He married Marianne in 1973 and they have two sons and two grandsons.

Ransom for the Stars is sub-titled “The Adventures of Bonnie Day.” And if that tells you anything, it’s that author Jim Bray is a little cheeky. Bonnie Day doesn’t even remotely have a good day.

Set somewhere in the far future (I don’t know when), ex-secret agent Bonnie Day is trying to enjoy her new retirement from The Club in the popular casinos on the planet Gault. Naturally, across the galaxy, someone has kidnapped two ambassadors from two warring planets on the eve of an important peace summit. The Club would like to investigate, but, wouldn’t you know it, they’ve come under attack and there’s no one left to help but Bonnie Day. Not that she’ll come along willingly. She’s retired, darn it!

So begins that crackling inter-planetary spy novel that is Ransom for the Stars. Calling it a spy novel is about as fair as I can be, I think. It’s similar to a James Bond novel, but without the focus on seductive, but generally pointless, beautiful women. Instead, Ransom for the Stars focuses on one kick-ass woman. She’s a little violent and a little remorseless, but, in her defense, everyone is trying to kill her.

This book generates a lot of charm and wit. I think cheeky was the right word. I’m not sure how the author does it, because it feels effortless. It needs to be this way, too, because the majority of the story is from Bonnie Day’s perspective, so she better be interesting. Thankfully, the author is inside her head in the best way. She feels alive from her first entrance, almost as if the book was in first person, but it isn’t. the prose is lean and sharp, never really letting up, which is exactly how Bonnie is. The supporting characters all feel unique as well, though without a lot of depth. In this type of story, that’s okay, though. Or at least it worked for me.

The other reason the book needs that fun and fast feel, is that, for what is essentially a science fiction story, there isn’t a lot of world building. The reader’s imagination has to fill in a lot of pieces. Again, I think it works because the author isn’t writing hard science fiction. He’s writing a fast-paced thriller with a little space opera thrown in. However, I do think the story could have used some world-building, even a little. There’s room for it, as it clocks in at under 60,000 words. All we get for the setting is, there is some kind of collection of developed planets called the Co-operative, but not all planets are part of it. The Club is a contractor, running agents on all sorts of different missions. Is the Club part of the Co-operative government (assuming there is a centralized government)? I’m not sure. Does it matter? Probably not. But you know when you like something and you want to know more about it? That’s this.

What else? The pace is just right, with enough mystery, action, and humor doled out to keep the reader happily moving along. It all works really well. I just wish is was longer. I didn’t feel cheated, though. It’s well worth the read.

SOME INFORMATION ON THE PUBLICATION DATE: I found this book on Smashwords with a 2017 copyright. A little research shows it was first published in 2005, so it looks like a new edition. However, I read this story without knowing about the previous publication date, so I am not sure if any content changed since the 2005 version. This review refers to this 2017 e-book version, which is excellent.

You have subscribed to alerts for Jim Bray.

You have been added to Jim Bray's favorite list.

You can also sign-up to receive email notifications whenever Jim Bray releases a new book.