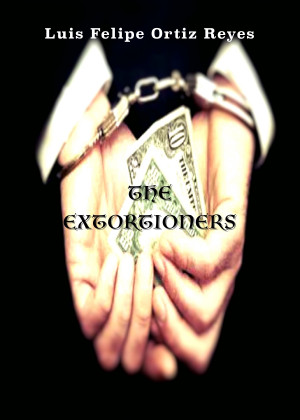 By Luis Felipe Ortiz Reyes
The story evoked in “The Extortioners” is a bitter satire where the narrative discourse is conducted to show the deterioration of a country and its people, caused by bad policies driven by their rulers. More
In “The Extortioners” evidenced and dissolution of political society space is accentuated in a simulated country where any reference to chance is deconstructed and in which the characters represent their own process of enunciation, its own discursive structure, becoming witnesses and doers of the socio-cultural life of their country. In the story the boundary separating the imaginary from the real, to rethink the tension between politics and economics, commitment and reality through an excuse, where a man becomes wrapped in a troubled relationship between law is cleared and transgression and is blackmailed by a young, poor example of what you can do to get rich at the expense of whatever.

This history as a body shaken by extortion becomes a reflection of citizens who recognize incomplete, but in turn willing to break the bonds that oppress through another system that defines not mutilate, without division, which propose answers to the questioning of the ruling political ideology. So the text is no longer full meaning, to make way for the inquiry, where the characters are alone ironically, to the extent that it promotes in the reader the desire to participate actively in the proposed dialogue, where Luis Ortiz assumes the risk of using the refined word for points closer to the limit where the cruelty of the political system.

The story evoked in “The Extortioners” is a bitter satire where the narrative discourse is conducted to show the deterioration of a country and its people, caused by bad policies driven by their rulers. It is a discussion of how the policy is part of everyday life about how often unseen that has always done politics, gestures and words as much as in the acts not only of criminals, rulers and dictators, but of us, good men.

First 10% Sample: epub mobi (Kindle) lrf more Online Reader
pdb
Price: $3.99
$1.00 USD
Buy with coupon Use the code SSW75 at checkout for 75% off during our site-wide promotion!
(Offer good through July 31, 2020 )
Have a better coupon?
Add to cart, then apply your coupon
Add to Library Give as a Gift
How gifting works
Create Widget
Tags: country political drama decadence extortioners
About Luis Felipe Ortiz Reyes

He was born in Venezuela. Studied Mechanical Engineering at The University of America Foundation (FUA), Bogotá, Colombia and obtained a degree in Mechanical Engineering from Zulia University (LUZ), Maracaibo, Venezuela, and a law degree at The Central University of Venezuela (UCV), Caracas.
He has completed numerous postgraduate courses such as:
° Financial Management at the Massachusetts Institute of Technology, Boston.
° Finance at Pennsylvania State University, Pennsylvania.
° Management Research Battelle Memorial Institute, Ohio.
° Management at the Management Association, New York.
He is livestock and has been President of several companies and institutions and member of The Association of Comprehensive Public Policy (AIPOP).
He was 2012 Prize of the Foundation for Culture and Arts (Fundarte) in the first edition of the Narrative Competition.
Finalist in the contest micro stories Banesco, 2012.
I Hispania Finalist in the Historical Novel Prize, organized in Spain in 2013, Editorial by Altera.
He received the Order of Merit at Work in your first class, awarded by the Government of Venezuela. 1998.
He has published articles in the multitude numerous press and has written and published several books, among which are:
°Capital Investments in the Andean Market, 1973
°Annotations on the Venezuelan Penal Law, 1977
°Livestock Cruz de Hierro, 2010
°Livestock Bellavista, 2011
°The Extortioners, 2011
°The Power, 2015
°Insiders, 2015
°The Matador, 2016

You have subscribed to alerts for Luis Felipe Ortiz Reyes.

Would you like to favorite Luis Felipe Ortiz Reyes?

You have been added to Luis Felipe Ortiz Reyes's favorite list.