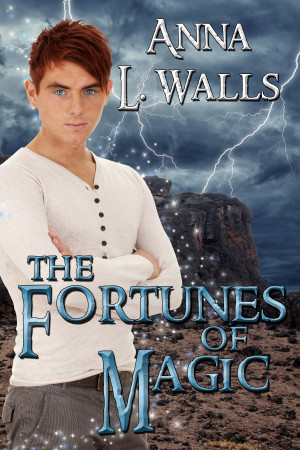 The Fortunes of Magic

By Anna L. Walls
When it was discovered that Liam could wield magic, it was also discovered that he needed someone to teach him how to manage it. No one knew why his power was so great. Was it because he was so small? Maybe. But it soon became quite clear that people would kill to gain control over him. Only the most powerful man in the empire could protect him. But could he protect him from himself? Maybe not. More
Liam's life turned very interesting when he moved with his parents to a planet that had yet to become a full-fledged member of the empire. Having yet to even earn a name, there was no reason to suspect just how much his life would change.

The people of Planet 663-457 were happily lodged between the Iron Age and the Machine Age. The only, and by far biggest, difference between these people and the people of Earth was the fact that they were about four times the mass of the normal Earth human. This, however, didn’t stop twelve-year-old Liam from making fast friends with three local boys and they were soon inseparable.

There was one aspect about the planet and its people that Liam’s parents didn’t find out about until their son was irretrievably submerged in it - magic. Many people of Planet 663-457 had some modicum of magic but few were strong enough to be able to access it. Those that were strong enough were brought to the masters for testing and if they passed the test, the masters took on their training.

As soon as Liam’s parents found out what had happened to their son, their response was to leave the planet. Leaving the planet, however, could not protect Liam; it was too late for that. In fact, he came to understand that his leaving put himself and others around him at extreme risk - he very much needed the training the Masters offered.
Available ebook formats: epub mobi pdf lrf pdb txt html
First 20% Sample: epub mobi (Kindle) lrf more Online Reader
pdb
Price: $3.99 USD
Buy Add to Library Give as a Gift
How gifting works
Create Widget
Tags: coming of age magic empire
About Anna L. Walls

Reviews of The Fortunes of Magic by Anna L. Walls