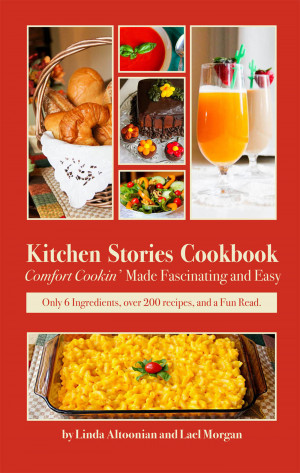 The authors are both journalists who have traveled throughout the world. Along the way, they have gathered and featured in the book the extraordinary food tips gotten from cozy, down-home kitchens to 5-star hotels and restaurants, and they introduce each recipe with a captivating story about their culinary adventures, historical information about the dish, or preparation suggestions. Their hints lists at the end of each section are excellent and not to be missed. This book is perfect for beginners, however, experienced cooks will appreciate the fine, full flavor of these well-loved offerings!

Born and raised in rural Maine, Lael Morgan started her career as a reporter for the Malden Press in Massachusetts, while attending Boston University. Later she became a photojournalist in Alaska and then enjoyed a five year stint for the Los Angeles Times.

In 1972 she returned to the Far North for assignments with National Geographic, Washington Post, Christian Science Monitor, and Alaska Magazine, and also worked for University of Alaska Fairbanks where she taught writing, photography and multimedia.
In 1999 she became managing editor of the Casco Bay Weekly, an alternative newspaper in Portland, Maine. A year later she was promoted to publisher and remained in that position until the paper was sold in 2003. Then she served as a visiting professor at University of Texas at Arlington until 2005.

Morgan has authored more than a dozen books, including Kitchen Stories Cookbook: Comfort Cookin’ Made Fascinating and Easy with Linda Altoonian by Epicenter Press; Eskimo Star: From Tundra to Tinseltown: The Ray Mala Story, Epicenter Press, and Wanton West: Madams, Money, Murder and the Wild Women of Montana’s Frontier, Chicago Review Press, which appeared in 2011. Also to her credit are Good Time Girls of the Alaska Yukon Gold Rush, Epicenter Press, 1998; The Earthquake Survival Manuel (now published in Turkish), Epicenter Press, 1993; Art and Eskimo Power: The Life and Times of Alaskan Howard Rock, Epicenter Press,1988; Tatting: A New Look at the Old Art of Lace Making, Doubleday, 1977, plus And the Land Provides, Doubleday 1975.

Morgan currently teaches online for University of Texas while residing in Anchorage, Alaska. She is also working on a new book on titled Madeleine, An Autobiography and a Mystery.

You have subscribed to alerts for Lael Morgan.

You have been added to Lael Morgan's favorite list.

You can also sign-up to receive email notifications whenever Lael Morgan releases a new book.