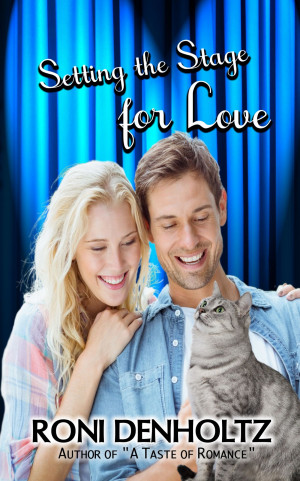 Setting the Stage for Love

William knows Brooke values honesty, and he’s keeping the secret that he arranged their meeting. The more he spends time with her, the more he knows that his feelings are no longer a teen’s… but the feelings of a man for a woman. How will she feel about his deception?

As they spend time together, Brooke’s life is becoming complicated. Between a cat she’s rescuing, a famous Egyptologist who’s also pursuing her, helping with her brother’s romantic problems, and starring in a community production, she’s got her hands full. She has blossoming feelings for William—but she’s frightened of taking a chance on romance.

Can she set the stage for the most important performance of all—true love?

By the author of “A Taste of Romance”

Roni Denholtz has published 8 novels and one novella. Her books have been nominated for the New Jersey Golden Leaf Award and the National Readers’ Choice Award. “Marquis in a Minute” won the NJ Golden Leaf award for Best Regency Romance. She has also written dozens of short stories and articles for magazines such as “Baby Talk,” “Child Life,” and “For the Bride.” She is the author of 9 children’s books, published by January Productions. “Jenny Gets Glasses” was named #7 of the Top Twenty Favorite Books of First Graders in a nationwide study by the Reading is Fundamental Group.
A former special education teacher, Roni also taught “Writing for Fun and Profit” in her local adult school for many years and some of her students went on to get published.
Roni is a member of New Jersey Romance Writers, where she served as president for the 2016 year; Romance Writers of America; and the Authors Guild. When her children were younger, she also was active in Marching Band Parents, Robotics Parents, and PTA.
Roni and her husband own an independent real estate company, Jersey Success Realty, in northwestern New Jersey. They have two grown children and a rescue dog. Roni served on the board of Noah’s Ark Animal Shelter for 8 years..
She is an avid reader, and enjoys photography, cooking and travel.
She loves to hear from readers! Find her on facebook and on her webpage at www.ronidenholtz.com

You have subscribed to alerts for Roni Denholtz.

You have been added to Roni Denholtz's favorite list.

You can also sign-up to receive email notifications whenever Roni Denholtz releases a new book.