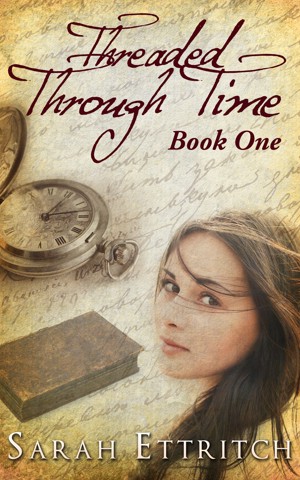 Threaded Through Time, Book One

By Sarah Ettritch
Rated 5.00/5 based on 3 reviews
Pam had only wanted to commune with the universe while reading a “moon rhyme” in the antique book she’d purchased from the local New Age shop. She had not expected guests—especially not Jasper and Margaret, summoned one hundred years into the future by the rhyme just as Jasper was proposing to Margaret. More
“For those who were born before or after their time...”

That described Pam. She’d always felt that she’d been born too late—there was no chivalry in the world anymore.

She’d only wanted to commune with the universe while reading a “moon rhyme” in the antique book she’d purchased from the local New Age shop. She had not expected guests—especially not Jasper and Margaret, summoned one hundred years into the future by the rhyme just as Jasper was proposing to Margaret.

Now the displaced visitors insist that they be returned to 1910, and Pam and her roommate Robin agree—an Internet check confirms that Margaret and Jasper were married by year end, 1910. But the rhyme won’t work until the next moon cycle, and in the intervening month, forbidden love blooms between Pam and Jasper, and Robin and Margaret.

They all know they can’t fight the inevitability of history. Margaret and Jasper must return to their proper time, and all must spend the rest of their lives dealing with the heartache of loving someone long since dead, or not yet born. At the appointed hour, Pam re-enacts the recital of the rhyme that brought the time-crossed couples together...but it doesn’t work exactly as planned.

At first I felt like there was too much foreshadowing. Of course Margaret and Robin would become attracted. Of course Pam would fall for Jasper. The only question was how those things would happen. But as it went on, I became more intrigued with how the author would get the characters out of the situation they were in.

Unlike the Rymellan series (by the same author), I didn't immediately have to buy the second to keep reading the story. That's not because it was less compelling, but because this book has such a great ending that it wouldn't matter whether there was a sequel.

It’s the year 2010 and Pam and her best friend and roommate Robin are currently sharing Pam’s house that had belonged to her family. Robin and Pam are quite different, one might say chalk and cheese. Robin is twenty six, an older university student and is a lesbian. She loves playing games on the internet. Pam is the same age, in to meditation and mystical things and is straight.

In the year 1910, Margaret lives at home with her parents and is about to become engaged to Jasper. A man she likes and respects but does not love. On the day that Jasper is proposing, Margaret and Jasper suddenly find themselves facing a strange woman, Pam and the year is 2010.

Pam had been reading a rhyme from a book she had picked up earlier titled Magical Moon Rhymes For All Times, when two strangers appeared from no where in front of her.

What does this mean? Are Margaret and Jasper stuck in 2010?

When Robin appears in answer to Pam’s frantic calls, the four people try to make sense of what has occurred. When it becomes apparent that Margaret and Jasper have travelled through time, Pam has to find a way to get them back to 1910. They find out that they have to wait a month until the next lunar cycle for the rhyme to work.

During this month, Pam and Jasper fall in love. Unknown to them at the time, Robin and Margaret have also fallen in love. How can each couple bear to be parted? But they know they must. Heart breaking as it is, they dare not try to alter time.

This is a lovely well written book of timeless forbidden love. The story goes between 1910 and 2010 with ease and is set in Canada. The four characters interact really well together after they got to know each other and to learn to trust.
This is the first book in a series and has got off to an excellent start. Once started I couldn’t turn the pages fast enough... I can’t wait to see which path Sarah is going to have these characters follow. I hope the sequel isn’t too long in being published.

With Threaded through Time Sarah has gifted us with another marvellous fantasy. This is set in modern times and 1910. The story is very entertaining, told very smoothly and although a sequel is planned the story doesn't leave us with a cliff-hanger. I loved the characters and the clash of times / mores and it was fun to have the story set in Canada too. I look forward to reading the sequel!
BTW: editing and ebook-formatting were examplary.