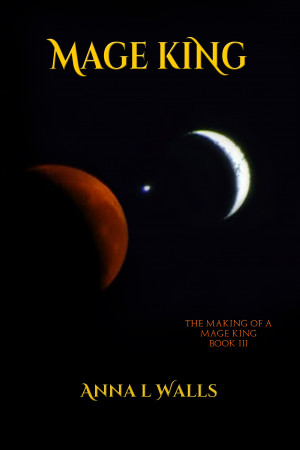 By Anna L. Walls
Sean needed to seal the entire land into his control and then he had to save the world - a task he never expected to need to worry about. At just seventeen - or maybe he was eighteen by now - he figured managing an entire country would be more than enough. His concerns for his people and his country kept him focused. He would be a strong king, but he would also govern like his childhood hero. More
Traveling the long way meant that Sean and his men were forced to take barges down river to the next garrison. It also exposed him to a danger he had been able to avoid traveling with a small army as he had been. Frustrated by the comparatively slow passage of distance under the boat, Sean was pacing the deck and though no one knew that he was the new king, he was obviously a wealthy traveler. One of the deck hands decided that a knife in the back, in the dark, would net him a comfortable number of gold coins, and launch the body overboard, no one would be the wiser until it was too late - he was mistaken. The act was seen and a search was started immediately. Sean’s instinctive use of magic to bring himself out of the water caught him in his trap and sent him to the palace, which was a good thing considering. As soon as those on the barges learned that Sean was safe, the deck hand went to feed the fish.

He had acquired the loyalty of two major armies during his travels around the northern half of his country, and after alerting them to be ready by dawn, went to the coast. Two of his coastal cities had been brought low and the citizens had fled up the river. Sean looked further along the coast and spotted more ships heading west under cover of dark. He warned that garrison commander, promising to be there at dawn to help, and then for good measure, he alerted the next garrison along the coast as well. It was time to secure his coastline. He desperately hoped he was not too late. It was incredibly frustrating - he didn't have time for this, but it wasn't something he could do later.

After his coastline was secure, Sean still had at least a third of the country to go and winter was fast approaching. In the end, he didn't quite make it to all the district capitals, but it was enough. With his last awareness, he came to understand why he needed to touch so many of the old lords. Without them, he wouldn't have been able to save the world. He came home and was utterly senseless for months. The magical drain on every magic user in the country had been brutal, but it was hardest on the strongest, and Sean was strongest of all. Would he ever wake up? Would he be burned out if he did wake? As it turned out, it was his wife's labor pains that woke him. As soon as he recovered, tie up all the loose ends and become the king he wanted to be.
Available ebook formats: epub mobi pdf lrf pdb txt html
First 20% Sample: epub mobi (Kindle) lrf more Online Reader
pdb
Price: $3.99 USD
Buy Add to Library Give as a Gift
How gifting works
Create Widget
Tags: magic kingdom prince royalty
About Anna L. Walls

About the Series: The Making of a Mage King series

Sean's mother dies a mysterious death - it is as if she just stopped living, then his father dies supposedly in the line of duty a short time later, but then he learns that neither one of the people he knew as Mom and Dad were really his parents. That he was in fact a prince somewhere else, and that somewhere was nowhere he'd ever heard of. Now he needed to go back. He was no longer safe here.

Also in Series: The Making of a Mage King series

Reviews of Mage King - Book 3 of The Making of a Mage King Series by Anna L. Walls