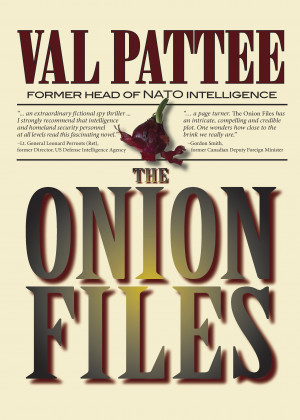 As a young fighter pilot I patrolled the Iron Curtain with loaded guns, World War III a mere trigger finger away. When I finished my career I was the Chief of Intelligence for the North Atlantic Treaty Organization in Europe and for Canada. In those capacities I lived daily with the real life fodder that makes for suspense thrillers – for instance, from my fighter jet, the F86 Sabre, while MIGs watched from across the buffer zone, to later as Soviet battle commanders in the guise of lorry drivers reconnoitered their targets in Europe.
When I started writing I wanted my novels to relate to today’s realities, daily front line news, to be plausible, with characters built around the actual people I worked with. A challenge was how to tell the story without violating my high level security clearances, which apply for life.
I was in at the beginning of cyber threats and well aware of the vulnerability of our infrastructure. The themes of both The Onion Files and The Crescent Onion are topical, and are regularly discussed and reflected in the media.
I worked closely with a former commander of the United States Defense Intelligence Agency. He thoroughly enjoyed the story and agreed that The Onion Files could be real. He applauded the Buchan family’s unconventional intel and security actions that prevented disaster and recommended that his staff read The Onion Files. The Crescent Onion continues the cyber threat to America. The Buchan family computer skills and wide range of intelligence contacts save Miami.
As my manuscripts hint, I disagree at times with policies and operations that have taken us to combat in the Middle East and the threat of terror attacks at home. Jim Buchan, the central character in the stories, reflects my views and has something to contribute to the ongoing dialogue around our war on terror. Like Tom Clancy’s hero, Jack Ryan, Jim Buchan’s contacts and out-of-the-box approach to security threats succeed where official channels could not.
The Onion Files and The Crescent Onion compare favorably with best selling suspense thrillers, the plot and characters closer to reality than many. Readers of The Onion Files ask two questions–when can they read the sequel, The Crescent Onion, and when can they see the movie.
I had the making of suspense thrillers in mind throughout my whole Royal Canadian Air Force and Public Service careers. The last period of my military service was at the top level of Cold War Intelligence, my daily intelligence briefing packed with the possibilities of plots for my novels. I started putting fingers to keyboard soon after I retired. Over the years I had good secretarial assistance, so like most of my generation, couldn’t type. It was my son Richard who twisted my arms to move me slowly into the computer age.
As I started to capture ideas, I found that I had a major concern—I had top level security clearances, so wrestled with how much I could say. Again, my son solved that dilemma, telling me anytime I got hung up to tell him and he’d find the issue in open sources on the Net. Most everything is now in open sources on the Internet, available to anyone.
Dreaming up the plots and writing the stories was fun, but many authors would agree that the challenge then is what to do with the story. After many regrets from literary agents I decided not to wait and linked with an excellent indie publisher. We had good fun putting The Onion Files to press, with the first edition of The Onion Files being one of the early ‘print on demand’ books. When an order is placed it goes to a printer, is produce overnight and mailed the next day, no warehouse full of paper. We did soft cover, hard cover, e-reader and audio versions to excellent reviews and modest sales success.
As I got well into my second novel, Crescent Onion, I realized that The Onion Files would benefit from more critical editing. I undertook that task over the next couple of years. I wanted to give traditional publishers another try for my second novel, The The Crescent Onion, so I again did the agonizing Query process, to many agents. The publishing industry moves at glacial speed so for me, accustomed to fast decisions and action, the process is painful.
It’s a new world for authors and readers, with books just a key punch away, the whole publishing landscape rapidly evolving. For me, it turned the agonizing publishing process into fun.
The Onion Files and The Crescent Onion reflect the almost daily news of cyber terror threats to critical infrastructure.

About the Series: The Onion Files

The Onion Files books are fiction, but Val Pattee infuses the action with a realism of people and places only an insider could deliver. The titles refer to terrorist attacks, first to an ingenious and diabolical plot by al Qaeda to devastate vast areas of the United States soon after the 9/11 attacks. The Crescent Onion turns the terror master, Kazim, to a colleague seeking help against his own terrorists. Val introduces readers to protagonists Jim and Mark Buchan, who work with the US Central Intelligence Agency and Russian counter-terrorism units in fast-paced hunts across three continents to halt cyber terror.

Also in Series: The Onion Files

You have subscribed to alerts for Val Pattee.

You have been added to Val Pattee's favorite list.

You can also sign-up to receive email notifications whenever Val Pattee releases a new book.