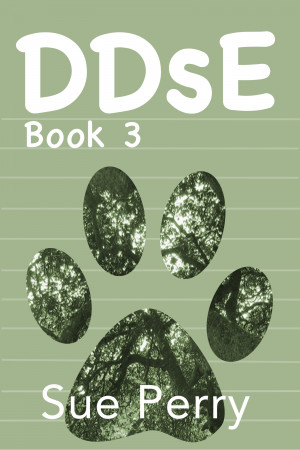 By Sue Perry
Rated 5.00/5 based on 2 reviews
A girl, a boy, a feral cat, pursuit by unhuman things. Love, tragedy, adventure, and danger unfold in the diary of a 16yo girl. More
Being sixteen is Tupac Eminem. Ella has no one to talk to except her new diary, which she has to hide from Ma and Pa Warden, the foster parents she’s stuck with since her family got flattened in a car accident. Now that she lives with the wardens, she has to switch to a new school, where people act like her tragedy is contagious. Her new suburb is just as boring as the last, and offers no hope of secret passageways or magic. But life is not all bad. There’s an interesting boy at the new school – although his family turns out to be impossibly dangerous. And there’s a feral cat, living in the suburb’s only open space, a pitiful excuse for woods. Sometimes the cat invades Ella’s mind. She tells her diary, ‘I’ve gone a special kind of crazy, a split personality. And my other personality is a cat, not a person.’
Download: epub mobi (Kindle) pdf more Online Reader
lrf pdb
Price: Free! USD
Add to Library
Create Widget
Tags: horror diary teen adventure cat fantasy female lead urbanfantasy teen heroine tees in love
About Sue Perry

After this short and compelling third instalment, I really have to find out what happens to Ella and Paul now. Will they find or even like the answers they seek?

(reviewed the day of purchase)
LornaWhite reviewed on May 15, 2017