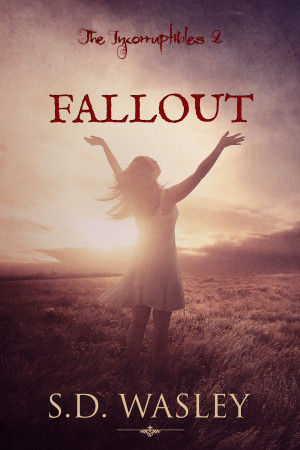 By S.D. Wasley
Even when love seems unbreakable, it can still be battered, distorted—damaged beyond recognition. Can Frankie and Cain's love survive the fallout?

Fallout is book 2 in the new adult paranormal romance series, The Incorruptibles. More
Even when love seems unbreakable, it can still be battered, distorted—damaged beyond repair.

There’s only one thing Frankie yearns for these days, and that’s to share the gift that makes Cain so extraordinary. But no matter how inferior she feels, she’s determined to help the man she loves with his secret rescues, hoping that one day she will access a higher power of her own.

The one thing she knows for sure is that nothing will ever come between her and Cain again.

Then a stranger arrives in their midst, disrupting the solid loyalties in Cain’s group. This man has the very thing Frankie needs to unlock her powers, but the price is higher than she could have dreamed.

Can Frankie and Cain’s love survive the fallout?

S.D. Wasley was born and raised in Perth, Western Australia. She has been composing literary works since before she could write – at five years of age she announced her first poem in the kitchen, improv-style. About 20 years later she earned a PhD in communications. She writes in a range of genres including young adult, paranormal, mystery, romance, and short stories.

Her debut novel was published in early 2015 through Evernight Teen. Today, she lives and writes in a wine region with her partner and two daughters, surrounded by dogs, cats and chickens. She also writes Australian fiction as Sasha Wasley.

About the Series: The Incorruptibles

This new adult paranormal romance series centers on a group of apparently mismatched people who share a strange secret. Led by Cain Aleister, the group is meeting nightly in a forgotten underground chamber, safe from the prying eyes of the public – until Francesca (Frankie) Caravaggio explodes into their lives. Frankie has a chip on her shoulder and a dogged determination to find out what the big secret is. But could that determination be her downfall?

Also in Series: The Incorruptibles

You have subscribed to alerts for S.D. Wasley.

You have been added to S.D. Wasley's favorite list.

You can also sign-up to receive email notifications whenever S.D. Wasley releases a new book.