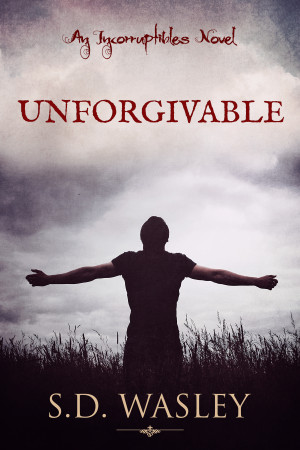 Unable to get the answers she seeks in Augur’s Well, journalist Piper Pavlich embarks on a hunt for the man who seems to be at the centre of it all. Piper’s about to find out what makes Leon unforgivable.

Unforgivable is a standalone book in the new adult paranormal romance series, The Incorruptibles. Read after Fallout, book 2, to avoid spoilers. More
Six months since she lost her job.

Six months since her bright future faded away.

Six months since she saw something that still keeps her awake at night.

Newspaper reporter Piper Pavlich was one of a handful of witnesses to the shocking events in Augur’s Well and she can’t shake the flashbacks. Evicted and jobless, Piper sets her sights on the backwater where it all happened. It’s time to get some answers.

Who better than a journalist to dig out the truth? Surely it’s just a matter of asking the right questions. But all the clues lead to Léon Gauvreau, that mysterious, sexy man she saw just once … who’s nowhere to be found.

Unable to get the answers she seeks in Augur’s Well, Piper embarks on a hunt for the man who seems to be at the centre of it all. When she finds Léon, he’s not alone, and he’s not what she expected. Is this really the guy everyone has warned her about? She’s fascinated and falling for him fast―while an invisible, dark fate closes in around her.

Piper’s about to find out what makes this man unforgivable.

S.D. Wasley was born and raised in Perth, Western Australia. She has been composing literary works since before she could write – at five years of age she announced her first poem in the kitchen, improv-style. About 20 years later she earned a PhD in communications. She writes in a range of genres including young adult, paranormal, mystery, romance, and short stories.

Her debut novel was published in early 2015 through Evernight Teen. Today, she lives and writes in a wine region with her partner and two daughters, surrounded by dogs, cats and chickens. She also writes Australian fiction as Sasha Wasley.

Reviews of Unforgivable - An Incorruptibles Novel by S.D. Wasley

You have subscribed to alerts for S.D. Wasley.

You have been added to S.D. Wasley's favorite list.

You can also sign-up to receive email notifications whenever S.D. Wasley releases a new book.