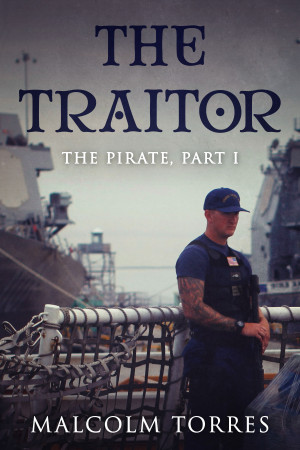 The Pirate, Part I: The Traitor

By Malcolm Torres
Rated 4.68/5 based on 40 reviews
When Jack Turner was arrested for stealing a car in LA, the judge gave him a choice: Two-years on probation or join the military. Now Jack is aboard the Coast Guard Cutter Almayer, 45-nautical miles south of Key West, Florida, standing watch as a lookout, searching for illegal aliens and drug runners. More
Young deckhand Jack Turner is 45-nautical miles south of Key West, Florida, aboard a Coast Guard Cutter. He's standing watch as a lookout, searching the open ocean for illegal aliens and drug smugglers. When he spots a speedboat that is trying to avoid detection, the chase begins. And so begins The Pirate, Part I: The Traitor a novel of adventure, thrills and crime that takes you from Los Angeles to Miami, and from Key West to Puerto Rico, along with Drug Enforcement Agents, Coast Guard sailors and ruthless drug kingpins. We ride along with Jack Turner as he goes on secret missions, gets involved on the wrong side of the law, connects with an old girlfriend who has a secret Jack may not want to hear. Look for Part II: The Kingpin and Part III: Big Daddy coming in 2018.
Download: epub mobi (Kindle) pdf more Online Reader
lrf pdb txt
Price: Free! USD
Add to Library
Create Widget
Tags: adventure key west navy coast guard sailor smuggler king pin
About Malcolm Torres

Malcolm Torres is the author of several novels including Sailors Take Warning and Sailors Delight. He also writes The Sea Adventure Collection, an ongoing series of stories about life aboard ships at sea and adventures in ports of call around the world. Many book reviewers have commented on Malcolm's ability to write vivid and gritty sea stories that put the reader right into the action alongside interesting characters.

After serving in the US Navy, Malcolm earned a Bachelors Degree at the University of Colorado in Boulder. He has worked in diverse career fields, including mechanic aboard the USS Enterprise, German-Jewish delicatessen cook, high school English teacher, microelectronics factory worker and renewable energy project manager.

Malcolm's writing has appeared in the Viking Monthly, the Colorado Daily and High Times Magazine. He is a scuba diver, a sailor of small boats, a mountain bike rider and an avid downhill skier. He lives with his family in the forest outside Portland, Oregon.

You can contact Malcolm through his website: www.malcolmtorres.com. Be sure to subscribe to his twice-annual newsletter, and look for his upcoming podcast: Lost at Sea with Malcolm Torres.

Downloaded this and read the whole thing in 45 min. It was excellent.

LA skate punk joins the Coast Guard, looks good in uniform, but deep down he's still a crooked punk. Every move he thinks he's getting over but he's just getting deeper and deeper into trouble. It's actually funny to be on the outside of this story looking in, because this is so believable. Should be made into a movie or a Netflix/Hulu special.

There is a good reason this book is called The Traitor, because in it a young Coast Guard sailor is getting himself in serious trouble stealing. He's steeling seized contraband from the DEA and Coast Guard and he's selling it in Miami to some dangerous double-crossing gang members. All the while he's having fun but it's not all fun-and-games because some of the characters are going to get injured, maybe end up dead. And all that just in part 1.

Pulse pounding action mixed up with laugh out loud humor, and I'm off to read part 2. Thanks, Malcolm Torres. I enjoy all your stories.

This took me by surprise. I was expecting a drug king pin or cartel leader to be "The Pirate" but that is not how the story goes. the author puts a twist on what you think will happen. Not sure if I like or hate the main character, but I am interested to read the next instalment.

About half way through this story I realized that I read this a few years ago. Back then it was on Amazon as a free short story. I liked it then, but it was only a stand along short story. My comment back then was that it should be expanded into a full action/crime novel. I am very happy that the author took my advice (lol), because now this story takes off like a rocket ride. The character is one of my all time favorites because he's a dopey teenager who is playing with fire (big time). I just bought the other two parts of this story and I can't wait to find out what will happen next.

This is an "in your face" story about a coast guard recruit who runs afoul of the law. Even though he's wearing the uniform and his captain thinks he's an eagle eye look out, he's actually a bad boy . . . with a guilty conscience. Jack Turner, the coast guard sailor, wants to do the right thing but in this story he's taking chances and potentially getting himself into some deep doo-doo. The future episodes of this tale will reveal how it turns out, I suppose. In this story, THE TRAITOR, every time you think you know where it's going, a new twist appears and takes the story in a different direction. But not to worry you are in the hands of a highly skilled writer who never lets you down and never leaves you confused. There are only a few characters and they are all on a collision course that builds up tension on every page. This is a crime story but not for the up-tight law abiding citizens who insists on accurate police procedures. If you only want your bad guys bad and your good guys good, then don't read this, because there is a lot of depth to the characters, they are very real and they play it fast and loose on both sides of the law (which is how things are in the real world at times).

The truth i can't wait for the part 2, Malcolm Torres still my favorite.

The protagonist is an inexperienced bad boy with the potential to do good in the Coast Guard. Humor, potential romance, drug trafficking complications. Good story.

Drugs seized from smugglers falls into the hands of a Coast Guard sailor and ends up back on the mean streets of Miami. This story plays around with this situation and adds humor, crime and friendship to create a good read.

You have subscribed to alerts for Malcolm Torres.

You have been added to Malcolm Torres's favorite list.

You can also sign-up to receive email notifications whenever Malcolm Torres releases a new book.