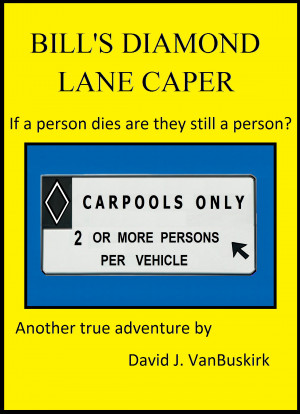 By David J. VanBuskirk
Does a dead body count as a person? A true life adventure, and an excerpt from my book, "My Life With Death". More
Dead or alive, is a dead human still a person. You be the judge. The true story of an employee's brush with the law.

Dave was born and raised in Oklahoma. Because he didn't want to become a farmer, or an oil field worker, he enlisted in the United States Marine Corps and left for active duty shortly after graduation from high school. His affiliation with the Marine Corps would span most of the next eleven years of his life. Following his tour of duty if Vietnam (1966-'67), he was assigned to the Inspector-Instructor staff, 3rd ANGLICO, USMCR, on Terminal Island. In November of 1970, then Staff Sergeant VanBuskirk was forced to retire with a thirty percent physical disability, caused by his Vietnam service.
Dave became a Mortician strictly by accident. To put it bluntly, he needed a job following retirement so he could feed his family of six. He eventually found employment driving an emergency ambulance, a job for which he had absolutely no training, except for his Boy Scout first aid and Marine Corps training. His new boss just happened to own a mortuary. After a few months of employment, Dave became an apprentice embalmer, served two years as an apprentice, and attended the Los Angeles College of Mortuary Science, graduating in September of 1973. Dave was a licensed embalmer and funeral director for the better part of thirty-two years.
Dave has been married to his best friend, Grace, for over thirty-six years and lives in Southern California, where he has lived most of his adult life. Four men and two women call him Dad, and nine youngsters call him Grandpa. He is also the proud Great Grandfather of one and a half.
Dave has also had a first person article published in the "Leatherneck Magazine", a magazine for Marines.

You have subscribed to alerts for David J. VanBuskirk.

You have been added to David J. VanBuskirk's favorite list.

You can also sign-up to receive email notifications whenever David J. VanBuskirk releases a new book.