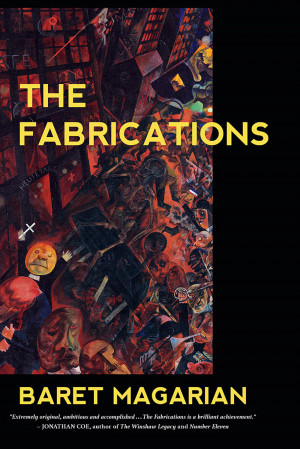 Baret Magarian is Anglo-Armenian. He was born and raised in London and currently lives in Italy. He began his career by writing features and reviews for The Times, The Guardian, The Observer, The Independent andThe New Statesman, then published fiction in World Literature Today, Journal of Italian Translation, the online magazines El Ghibli, Sagarana,and Voyages. His poetry has appeared in the Florentine magazineSemicerchio and the Australian anthology Contrappasso. He has worked as a translator, musician, lecturer, book representative, fringe theatre director, actor and nude model. He has recorded an album of acoustic rock, composed and performed piano music in the vein of Alkan and Jarrett, and recently staged his monologue “The Pain Tapestry” in Florence and Turin to great success. His writing has been praised by Jonathan Coe, the British novelist, by Bruce Hunter, the Canadian poet, and by Mia Lecomte, the Italian poet and critic.

Reviews of The Fabrications by Baret Magarian

You have subscribed to Smashwords Alerts new release notifications for Baret Magarian.

You have been added to Baret Magarian's favorite list.

You can also sign-up to receive email notifications whenever Baret Magarian releases a new book.