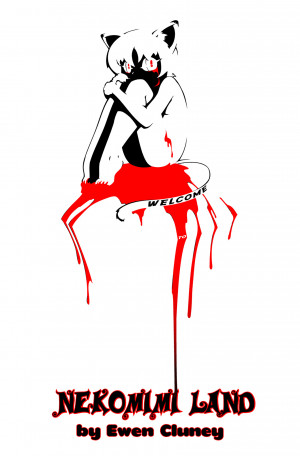 Then comes Nekomimi Land, the land of catgirls. Kaylee finds herself trapped there, in a place where catgirls live short, thoughtless lives and the few catboys use them as they please.

My name is Ewen Cluney. “Ewen” is pronounced like “Aaron” for reasons my parents have never adequately explained to me. I've worked extensively as a translator and localization editor, particularly in games, and also design and publish tabletop games.

Nekomimi Land is a book that's split into two interweaving stories; the protagonist's nightmarish trip to the eponymous Land, and flashbacks to the aftermath of their becoming a catgirl, in this world.

Both stories are frightening.

This is not a story of wish-fulfillment (for that, see Zandra Vandra's excellent Cat Wishes light novel). It's about wanting to simply exist, in a world that sees you as the ultimate sexualized fetish fuel. You could say that it's about a young man who discovers what women go through, every day. You wouldn't be more than half wrong.

The last part of the book is a selection of short stories, which explore the "catgirl transformation" concept from different angles. One is a prolonged allegory for something I didn't recognize, and one of the others -- while not nearly as harsh as Nekomimi Land proper -- seems to express an actual desire for wish-fulfillment via transformation, or at least a deep fascination therewith. But it feels as though the author couldn't bring himself to explore this in the way it deserves.

Perhaps this isn't the tale in which to do so.

You have subscribed to alerts for Ewen Cluney.

You have been added to Ewen Cluney's favorite list.

You can also sign-up to receive email notifications whenever Ewen Cluney releases a new book.