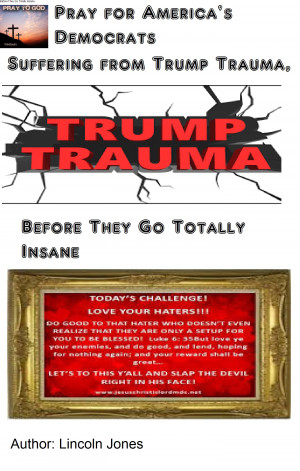 Pray for America's Democrats Suffering From Trump Trauma, Before They Go Totally Insane

Six months after the election it became clear. Only prayer can restore sanity to democrats. A wave of debilitating hysteria hit Americans who consider themselves progressive, liberal democrats. This collective obsessional behavior transmitted collective delusions of threats throughout the liberal, democrat population of USA society, as a result of President Donald Trump being elected. A flood of rumors and fears swept through America’s progressive extremists. Six months after the election, this group’s collective delusions increased, resulting in violence, hate speech, a biased media that could not be trusted and government resistance. Time did not heal the democrat’s incarnation of evil. We reached a crisis that could not be cured by democrats thinking rationally or behaving decently – on their own. We all should make a special effort - every day - to pray for these lost liberal souls.

You have subscribed to alerts for Lincoln Jones.

You have been added to Lincoln Jones's favorite list.

You can also sign-up to receive email notifications whenever Lincoln Jones releases a new book.