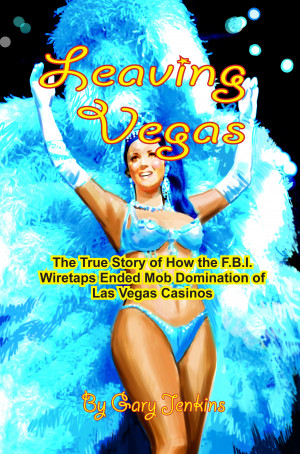 Leaving Vegas is a unique read, especially for true crime aficionados, as it provides verbatim transcripts of the actual wiretaps. Jenkins provides contextual explanations and behind-the-scenes scenarios as agents inserted themselves and their listening devices into the places where mobsters made phone calls to their operatives in Vegas and even where they gathered for pasta and family pow-wows. More
Leaving Vegas a fascinating glimpse into the world of Kansas City mobsters in the 1970s

You don't have to be a local history buff to be interested in the chronicles of Kansas City's infamous mob family. Those of us who were around here in the mid-1970s recall the headlines. Gary Jenkins, a former police detective (now attorney and author) takes us back to the players and key events of those days in Leaving Vegas: The True Story of How the FBI Wiretaps Ended Mob Domination of Las Vegas Casinos
.
He sets the scene with descriptions of the anti-government attitudes that prevailed with Vietnam War protests and the Watergate scandal that brought a Presidential impeachment. But the groundwork that would lead to the end of mob dominance in Vegas had already been set with the passage of the Omnibus Crime Control Act of 1968. That document allowed court-ordered electronic surveillance in cases where installing a hidden microphone was the last resort among an arsenal of previous investigative efforts. As the FBI and Kansas City Police detectives filed the paperwork to listen in on key mob figures here, sports gaming and use of the Teamster's Pension Fund to finance purchase of casinos in Vegas were in their glory days. The wiretaps would soon uncover just how complex those operations were and how skimming cash from casino proceeds financed La Cosa Nostra families in Kansas City, Chicago and Milwaukee.
Leaving Vegas is a unique read, especially for true crime aficionados, as it provides verbatim transcripts of the actual wiretaps. Jenkins provides contextual explanations and behind-the-scenes scenarios as agents inserted themselves and their listening devices into the places where mobsters made phone calls to their operatives in Vegas and even where they gathered for pasta and family pow-wows.
We all know the rest of the story. Nick Civella and his lackeys, as well as members of the Chicago and Milwaukee families, were either convicted and sent to prison (with the exception of those who went into witness protection). Despite knowing the conclusion, readers of this book get a rare glimpse into the adrenalin-fueled drama and the conversations that took place among these career criminals as they plotted their strategies.
For those who want an even more intimate look at this era in Kansas City history, Jenkins' Kindle version of Leaving Vegas provides links to Vimeo audio recordings of the actual wiretaps, some of it in Italian, but all of it lending an authenticity to a fascinating time in local history. And in case you don't remember what the key players looked like, Jenkins provides links to mobster photos too.

This is Jenkins' third book.

Gary Jenkins served 25 years with the Kansas City Police Department. He was assigned to investigate the Mob for 13 of those 25 years. He attended the University of Missouri at Kansas City School of Law and is a practicing attorney. He produced 3 Documentary films. The first was Negroes to Hire: Slave Life in Antebellum Missouri. The second was Freedom Seekers: Stories From the Western Underground Railroad. The third was Gangland Wire: How the Mob Lost Las Vegas. He created and maintains a popular smart phone app called, Kansas City Mob Tour. He is a speaker on the subject of the Underground Railroad on the western frontier and the Mafia in Kansas City, Missouri. He has written one Young Adult historical fiction titled, John Brown and the Last Train.

Gary's most recent project is his fun and interesting true crime podcast, Gangland Wire. He co-hosts this lively and exciting show. Gary's cohost is Aaron Gnirk, comedian and producer of the Big Dumb Fun Show.

In 1976, Gary was assigned to Operation Strawman. He helped the F.B.I. follow Kansas City Mafia members to learn which pay phones they were using to call their mob contacts in Las Vegas. You will find an account of his work in the popular book, Casino by Nicholas Pileggi.

You have subscribed to alerts for Gary Jenkins.

You have been added to Gary Jenkins's favorite list.

You can also sign-up to receive email notifications whenever Gary Jenkins releases a new book.