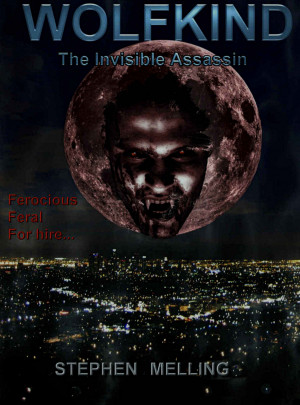 Joshua Grenire...sheltered since childhood. A needle starting at zero. Deprived of human contact he knows little of social interaction. When the Los Angeles mafia elite hire ruthless hitmen to eliminate the underworld A-list, it's feared the 'renegades' have re-surfaced. Joshua Grenire is compelled to hunt them. He is naive. He is scared. He wants only normality. But he is Wolfkind. More
In Los Angeles the question on everyone’s lips… “Who is the Invisible Assassin?” The elusive hit man who has the authorities baffled, the general public intrigued and the local gangland highbrows hiding behind razor wire and hi-tec weaponry.

With the city’s second most powerful crime family slaughtered, Joshua Grenire is pressed into action by his mentor, Max Barlow: hunt and kill the assassin. Though burdened by social inexperience and the crushing responsibility of his mission, he is at the same time buoyed with child-like wonder at the prospect of finally interacting with ordinary people.

Once in L.A. Joshua infiltrates the Durant crime syndicate and acquaints himself with the mobster’s spirited civilian daughter, Genna Delucio. He finds himself breaking one of the rules by falling for the girl. While after nightfall he searches coldly for the assassin, during daylight hours he steals time to explore the simple rites of passage that long-term seclusion has denied him.

In a modern society blood-stained with intolerance and prejudice, street violence and contract killing, Invisible Assassin is a story about love and innocence struggling against the corrupting nature of power.

“Good story and good read, well-managed conclusion with all the right things happening in the right order. The characters were fresh and thought-through and although the 'they live among us' notion has been done before, the setup and the back-story were persuasive and felt newly-minted. I really liked the idea of the Wolfkind community living like the Amish or the Moravians, the whole moral-responsibility issue of their attempts to contain their 'virus', and the destructive nature of the religious guilt Barlow uses as a tool. Nice that Barlow did what he did for the best, but harm still came of it... quite a subtle and truthful-feeling outcome.”....... “I was impressed by the ending, which was very sure-footed and, as I've said, hit all the right notes in the right sequence.”

Before discovering the likes of Ramsey Campbell, Stephen King and Clive Barker (to name a few) my first real encounter with any kind of dark or speculative fiction was a collection of Hans Anderson’s fairy tales my sister got for Christmas. I was gripped by stories like The Tinder Box – those huge and enigmatic dogs with eyes as big as mill wheels; and the Brothers Grimm tale of Rapunzel locked in the tower by her wicked stepmother (Rapunzel Rapunzel – let down your hair!) Pretty spooky stuff, and though I read them avidly during the day, at night I would lie awake in fear of what lurked under the bed…
A few years later my first junior school teacher was Miss Williamson, possibly the most influential of all my early years teachers – or even later years. Her passion for reading out stories and holding attention was, in my opinion, legendary among the kids at Blessed Sacrament. If you’re out there, my hat comes off to you, Miss Williamson.
Her classroom renditions of The Land of Green Ginger and the C.S. Lewis stories resonate for me even today. Miss Williamson would enthusiastically narrate the story and provide fitting voices for each character, and throughout her readings not a single child would stir until she was done. Gripping stuff!
My first attempt at actually writing stories resulted in carbon copies of stories I’d already heard or read – I don’t think I even bothered changing character names. I once rewrote The Tinder Box using dinosaurs instead of dogs. Ah well.
It was in my early teens I discovered that writing stories people might actually want to read was possible. A friend of mine had written a werewolf story using his friends as the characters and our neighborhood as the setting. I read it and I loved it. I had a go and the literary infant I produced indeed had an idiot for a father. But it was a start.
After several failed attempts at getting published I began to lose heart. I started and aborted several novels; even finished a couple but they were too hackish ever to see the light of submission, let alone publication. In the late eighties and early nineties I wrote several screenplays and even had one optioned for production but alas, like the great majority of optioned screenplays, never saw that shining light of production.
Which brings me to FUSING HORIZONS. A new small press mag that promised great stories from both established and new writers. I promptly submitted by E-mail – a very convenient method! Editor Gary Fry promptly rejected it – and rightly so, but I felt lifted by his personal response and declaration that he’d like to see more from me. I sent him something I thought more suited to his predilection for existentialism. The story was called HOME, and he published it. My first and one of my favorites.
Wolfkind is my first novel. I felt passionate about the subject matter and I sincerely hope it translates well to the page. .
Other Stuff: Married, two kids, one mortgage and two dogs.

You have subscribed to alerts for Stephen Melling.

You have been added to Stephen Melling's favorite list.

You can also sign-up to receive email notifications whenever Stephen Melling releases a new book.