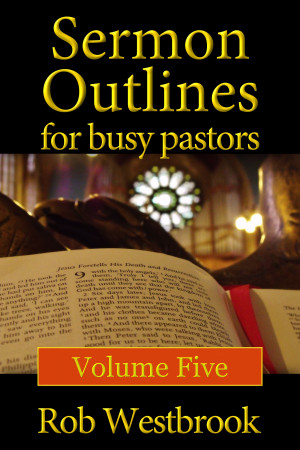 Sermon Outlines for Busy Pastors: Volume 5 gives the busy pastor a head start on sermon preparation. With 52 complete sermon outlines, pastors can save hundreds of hours a year, with the base research and layout for a year's worth of sermons already in place.

* These are complete sermon outlines. Each sermon outline is much more than a basic three point outline requiring a lot of time and research to flesh out. These outlines go much deeper, with each main point completely developed with sub-points and more.

* Each sermon outline is rooted in God's Word and expository with a wealth of detail, great for spurring your own thoughts and allowing you to take the sermon in another direction as you feel led.

* Every sermon outline is solidly based in the Bible and conservative theology.

* 3 complete sermon series, providing a map for the next several Sundays, saving many hours of advance planning and preparation.

If you're a pastor with more to do than time to do it, Sermon Outlines for Busy Pastors: Volume 5 is for you.

Rob Westbrook became a follower of Jesus Christ at the later age of thirty. Called into the preaching ministry at thirty-two, Rob attended New Orleans Baptist Theological Seminary, earning a Bachelors of Arts degree in Pastoral Ministry. He later earned forty-six hours toward a Masters of Divinity degree.

Rob became pastor of his first church, Hebron Baptist Church, in Amite County, Mississippi, in 1998, while attending seminary. By 2002 the time commitments to both seminary and the church became strained, and Rob chose to leave seminary behind for the church. Around 2005, God began preparing him for planting a new church. He left his first church pastorate in 2006 to become a church planter in his hometown of Amory, Mississippi. LifePointe Church had its first service in January 2008. Rob currently serves there, at LifePointe Church.

Rob has been married to Teresa for almost 23 years. He and Teresa have one daughter, Lauren, who is engaged to Brandon Britt. They will be married in March 2013.

You have subscribed to alerts for Rob Westbrook.

You have been added to Rob Westbrook's favorite list.

You can also sign-up to receive email notifications whenever Rob Westbrook releases a new book.