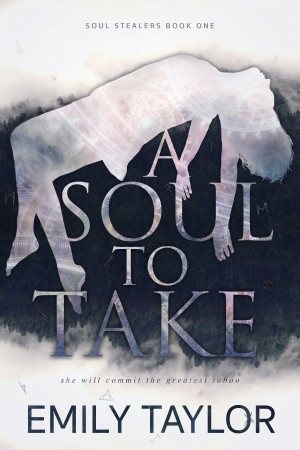 A Soul To Take

By Emily Taylor
Gritty, powerful, and exciting, A Soul to Take is a gripping debut that explores prejudice, justice, and the consequences one family faces when those two collide. More
The world has changed: demons of legend now live among humans, integrated into society through Government programs, wishing for peace.

Elixia Albelin, however, isn’t sold. As an Agent-in-training, she knows firsthand the blood-thirst of demons and isn’t jumping to befriend the monsters plaguing her dreams.
But when a mission sours, Elixia’s sister is caught in the crossfire: taken. Abandoned by those meant to protect her family, Elixia is left with only one option if she wants to retrieve her sister—a taboo option that goes against everything she believes in.

She must sell her soul.

Now, bound to a beast and living on borrowed time, Elixia has to navigate the demonic world to find her sister within a cesspool of human traffickers and serial killers. Enemies control her fate, the simplest truths are questioned, and misperceptions must be shattered. Only one thing remains consistent—Elixia must find her sister before time runs out. Or become the very thing she fears most: a soulless monster.

Gritty, powerful, and exciting, A Soul to Take is a gripping debut that explores prejudice, justice, and the consequences one family faces when those two collide.
Available ebook formats: epub
Price: $5.99 USD
Buy Add to Library Give as a Gift
How gifting works
Create Widget
Tags: demon demons agent human trafficking drug dealing
About Emily Taylor

Emily Taylor began writing in early primary school and after two novellas, which will never see the light of day, she began to join writing sites. She finished her first novel, Blood of Angels, on Goodreads before moving to the disbanded Inkpop. There, she finished her second novel, To Turn Left, which hit the Top 5. Figment bought Inkpop in 2012, making her the last ever Inkie of the Week, and To Turn Left became a “handpicked fig” by author Jackson Pearce that same year. Recently,Taylor has become more active on Wattpad, finishing Unmask Me, A Soul to Takeand a remake of Blood of Angels, which will enter the 2013 Watty Award Competition.

Besides writing, Taylor currently studies Music Technology at her state’s Conservatorium and recently helped on Respect Cat Production’s feature film, In a Corner, as a Script Advisor. She looks forward to taking up screenwriting electives in the future.

A Soul to Take is her first formally published work and Book One of The Soul Stealer’s Trilogy, a New Adult paranormal romance with elements of dark fantasy and steampunk.

You have subscribed to alerts for Emily Taylor.

You have been added to Emily Taylor's favorite list.

You can also sign-up to receive email notifications whenever Emily Taylor releases a new book.