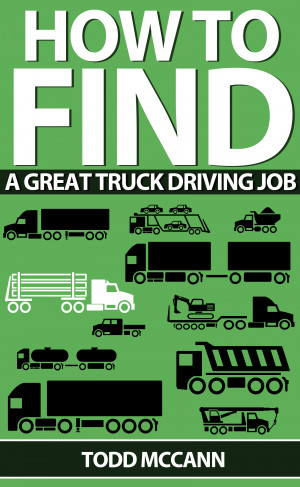 How to Find a Great Truck Driving Job

By Todd McCann
How to Find a Great Truck Driving Job is designed for people new to the trucking industry, but it can also help experienced truckers. The book begins with some basic information about how the hiring process works, but the majority is a list of questions you should be asking any potential employer. Alongside is a detailed description of why you're asking it as well as elaborating on each subject. More
Let's face it. Truck drivers change jobs like infants change poopy diapers. Why is that? Part of it is trucking companies are always changing pay packages to entice drivers from other carriers. But another major problem is that truckers change jobs without enough research into their new employer. So how can you avoid these issues? You can make sure you ask all the right questions by using the included questionnaire!

For drivers new to the industry, the book covers the driver retention problem and discusses how to deal with trucking company recruiters. For experienced drivers, we also discuss some of the misconceptions about these recruiters. The questionnaire encourages you to ask the recruiters questions that are vital to finding a great trucking company. We discuss all kinds of topics, including driver requirements, different types of fleets, electronics logs, trucks and trailers, home time options, and benefits packages, just to name a few. And of course, we discuss the craziness of pay packages and all the intricacies of making sure you're comparing apples to apples.

Perhaps the best thing about "How to Find a Great Truck Driving Job" is that it is a work in progress. The trucking companies are all so different and have so many options that there's no possible way this book could answer every question in the first edition. Because of that, readers are encouraged to send in their own questions so they can be added to future editions. And you'll be credited for doing so!

So grab your copy of "How to Find a Great Truck Driving Job," print off some questionnaires, and start finding YOUR great truck driving job!

Todd McCann is a trucker who has been married to a chick named Lorinda (lovingly referred to as The Evil Overlord) since 1993. He's been driving the big rigs since way back in 1997. The Evil Overlord was his co-driver and antagonist for nine of those years, so he's got experience with both solo and team driving. He's also still trying to figure out how he lived in a semi with her for that long without being involved in a murder trial. ;-)

Todd is a Christian who won't shove it down your throat, an uncle of four obnoxious, but loveable nephews, an unapologetic Apple fan boy, and a golfer who loves it so much that he spends an extra couple of hours looking for his ball every round.

Todd also does the Trucker Dump podcast/blog and is the author of two books about trucking.

"Trucking Life" is an entertaining, yet informative guide to being and becoming a truck driver. He explains the world of trucking through the telling of personal stories and some really lame attempts at humor. Whether you're just curious about the trucking lifestyle or you're considering truck driving as a career, this is the book for you. Every ebook version comes with details on how to receive a free audiobook version!

"How to Find a Great Truck Driving Job" is a guide for truckers who need help finding a good job. It was designed for newbies, but experienced drivers can benefit from it too. It explains how to deal with recruiters and it provides a printable list of questions that you should always ask the recruiters. Furthermore, for each question there is an explanation of why you're asking the question in the first place.

You have subscribed to alerts for Todd McCann.

You have been added to Todd McCann's favorite list.

You can also sign-up to receive email notifications whenever Todd McCann releases a new book.