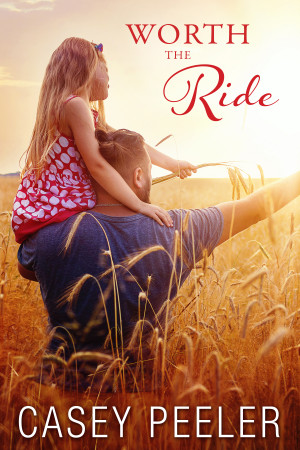 Dedicated and driven veterinarian, Timber Sellers always knew that she'd head back home, but she wasn't quite ready for it to happen so soon. Running into the stubborn and bossy Weston from her high school days doesn't make it any better either. But when she meets his spunky daughter, Timber knows she's right where she's supposed to be. As Timber grows closer to Weston's daughter, his rough exterior softens. Suddenly, the heat between them explodes and neither can deny the attraction. Weston always goes after what he wants, and this time, he wants a future with Timber.
Available ebook formats: epub mobi pdf lrf pdb txt html
First 20% Sample: epub mobi (Kindle) lrf more Online Reader
pdb
Price: $9.99 USD
Buy Add to Library Give as a Gift
How gifting works
Create Widget
Tags: inspirational small town rodeo farmer cowboy romance secret baby second chance romance milionaire single dad romance clean and wholesome
About Casey Peeler

Casey Peeler grew up in North Carolina and still lives there with her husband and daughter.

Growing up Casey wasn't an avid reader or writer, but after reading Their Eyes Were Watching God by Zora Neal Hurston during her senior year of high school, and multiple Nicholas Sparks' novels, she found a hidden love and appreciation for reading. That love ignited the passion for writing several years later, and her writing style combines real life scenarios with morals and values teenagers need in their daily lives.

When Casey isn't writing, you can find her near a body of water listening to country music with a cold beverage and a great book.

Reviews of Worth the Ride by Casey Peeler

You have subscribed to Smashwords Alerts new release notifications for Casey Peeler.

You have been added to Casey Peeler's favorite list.

You can also sign-up to receive email notifications whenever Casey Peeler releases a new book.