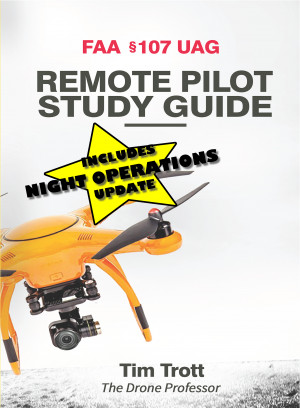 By Tim Trott
The FAA specifically generates the Remote Pilot Certification exam to blunt attempts at memorization. That is why I teach understanding of the material necessary to pass the test. This material is based on the FAA's ACS (Airman Certification Standards) for UAS (UAG or drone) licenses, reviewing each of the items specified in Part §107.73.
Knowledge is the Foundation of Safety. More
This publication has been revised and updated to include new material based on feedback from our students who have passed the FAA exam.

A video presentation of this material is also available.

This study course is not represented in any way as an official FAA training course, but students of this instructor have passed the exam with an average a score of 88% (70% is passing).
Available ebook formats: epub mobi pdf lrf pdb txt html
First 20% Sample: lrf pdb Online Reader
Price: $9.95 USD
Buy Add to Library Give as a Gift
How gifting works
Create Widget
Tags: faa 107 drone license remote pilot remote pilot certification
About Tim Trott

Tim Trott has always had a love for writing and teaching. His first writing for publication came in High School when he wrote reports on a YMCA trip to Monterey, Mexico which were published in the Orlando Sentinel. Fast forward to 2016, when his fascination with drones led to purchase of a DJI Phantom 2, and writing about the experience in The Droner’s Guide, which was replaced by FAA Remote Pilot Study Guide a year later, and expanded to online training at TheDroneProfessor.com.

Still on the aviation theme, Tim wrote about Kirby Grant, the star of the 1950’s television series, “Sky King” in Out of the Blue. Tim became acquainted with Kirby through a mutual friend when the Grant family moved to Central Florida in 1971.

Tim is also involved with hosting and designing web sites, and has used that experience to write Guarding Against Online Identity Theft, with a Spanish translation, in 2022.

Now retired and living on Florida’s East Coast, and still staying with the non-fiction trend, T is for Treason traces the history of that topic from Benedict Arnold to the present day.

You have subscribed to alerts for Tim Trott.

You have been added to Tim Trott's favorite list.

You can also sign-up to receive email notifications whenever Tim Trott releases a new book.